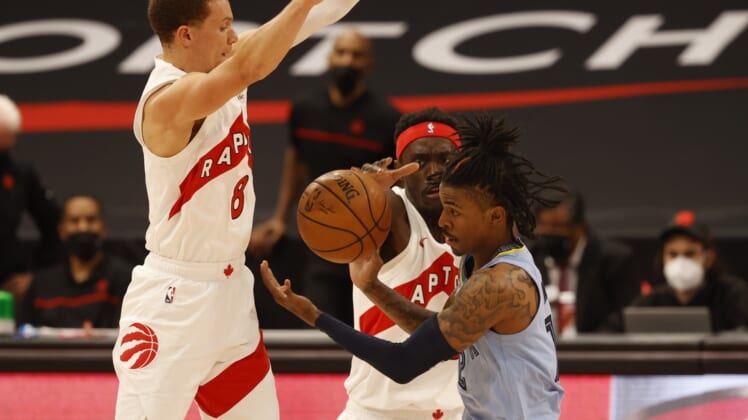 The Grizzlies (34-33) picked up another crucial win to help their push for the postseason. Memphis entered the day a half-game behind the Golden State Warriors for the eighth spot in the Western Conference and one game ahead of the San Antonio Spurs. The victory moved them four games ahead of the idle New Orleans Pelicans with five left to clinch at least a berth in the play-in tournament.

Pascal Siakam and Gary Trent Jr. each had 18 points to lead the Raptors (27-41), who lost for the sixth time in their past seven games and were officially eliminated from postseason contention after the loss and the Washington Wizards’ victory over the Indiana Pacers on Saturday.

Toronto pulled to within a point with 6:41 left before De’Anthony Melton scored nine of his 15 points in a row on three 3-pointers to spark an 11-1 run which helped the Grizzlies begin to pull away.

The Grizzlies prevailed despite 17 turnovers, which led to 20 Toronto points. Ja Morant only scored 12 points but finished with seven rebounds and six assists. Desmond Bane also had 10 points.

The Raptors played without point guard Fred VanVleet (left hip flexor), while Chris Boucher (knee) missed his eighth game in a row and OG Anunoby (strained left calf) missed his fourth in a row. Kyle Lowry (rest) sat out for the fourth time in the past five games. Aron Baynes (left foot contusion) also did not play.