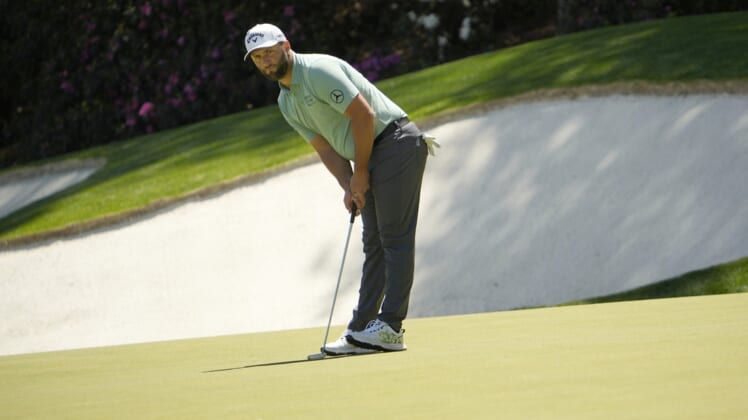 Jon Rahm of Spain made a 42-foot eagle putt as part of a bogey-free, 7-under-par 64 to join a six-way tie for the lead after one round of the Mexico Open in Vallarta, Mexico.

Behind the group of six, Englishman Aaron Rai, Aaron Wise, Sahith Theegala and Scott Brown opened with 6-under 65s.

Rahm started his round on the back nine and made four birdies, including three straight at the 12th through 14th holes. He was 5 under when he reached the short par-4 seventh hole and drove the green. His long, uphill eagle putt found the left side of the cup to get him to 7 under.

Seeking his first win on tour since the U.S. Open last June, the No. 2 player in the world entered the week as the heavy favorite at a course hosting a PGA Tour event for the first time.

“It’s not the most demanding golf course off the tee, right, besides 10 and maybe 1,” Rahm said. “You’re not really in real danger of being in bad position, but even though it’s generous, when I’m hitting shots the way with the trajectory and the ball flight that I wanted, it just gives me more confidence for every other shot. I was really comfortable out there, so it reflected on the score.”

One of Rahm’s early birdies was a chip-in from just off the green at the par-3 13th.

“That was a huge bonus,” Rahm said. “I think a lot of people obviously would look at the eagle on 7, but that one early on was a huge booster.”

Mullinax also eagled the seventh after his drive nestled up within 8 feet of the pin.

Besides Rahm, the only other bogey-free 64 belonged to Todd, who also started on the back nine and made five of his seven birdies there.

“It was my approach play, I think,” Todd said of his best aspect of his round. “I just hit a lot of good irons and woods into the greens that left me with manageable two-putts and a couple tap-in birdies.”

Nimmer, ranked No. 688 in the world, was a Monday qualifier in order to make the field. He birdied four holes on the back nine to start, including when he stuck his tee shot at No. 13 to 4 feet. He rebounded from two straight bogeys at Nos. 1-2 by going 5 under over the last five holes.

Nimmer holed out from a greenside bunker for an eagle at the par-5 sixth and had three birdies. His 64 was a personal best for his Tour career.

“It was really nice,” Nimmer said. “It’s just hard if you ‘Monday’ in the week of because you’re like, ‘Where am I staying, where am I flying?’ But I had a nice week to figure it out. Got here, relaxed Sunday, got practice rounds in.”

The lowest round by a Mexican player belonged to Alvaro Ortiz, who shot a 3-under 68. Armando Favela and Carlos Ortiz shot 70 and Abraham Ancer, the second-highest ranked player in the field (No. 20), posted an even-par 71.