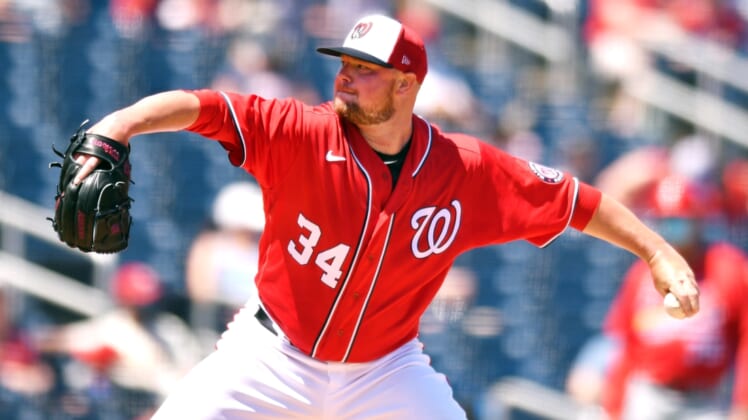 The Washington Nationals are close to getting Jon Lester back for his season debut, but exactly when is still not determined.

The 37-year-old left-hander hasn’t pitched this season after opening the campaign on the COVID-19 list. He was signed by the Nationals as a free agent in the offseason.

Lester has made three rehab starts at the team’s alternate training site at Fredericksburg, Va., including 90 pitches on Sunday during a six-inning stint. He also was slated to throw a bullpen session of 20 to 30 pitches prior to Washington’s Wednesday game against the Toronto Blue Jays at Dunedin, Fla.

“We want to make sure that he’s fully ready,” Nationals manager Davey Martinez said prior to Wednesday’s game and before Lester’s bullpen session. “With that being said, who knows? He might pitch this weekend for us or he might get another (rehab) start. We’ll determine that probably today after the game or tomorrow.”

Lester was one of nine Washington players who were sidelined due to COVID-19 protocols. He also had a brief setback in spring training when he had a parathyroid gland removed from his neck.

Lester missed parts of the 2006 and 2007 seasons with the Boston Red Sox while receiving treatment for anaplastic large cell lymphoma, a form of cancer.

Lester has made 26 career postseason appearances, starting 22 times and compiling a 9-7 record and 2.51 ERA. He won World Series rings with the Red Sox in 2007 and 2013 and with the Cubs in 2016, and he was the National League Championship Series’ Most Valuable Player in 2016.