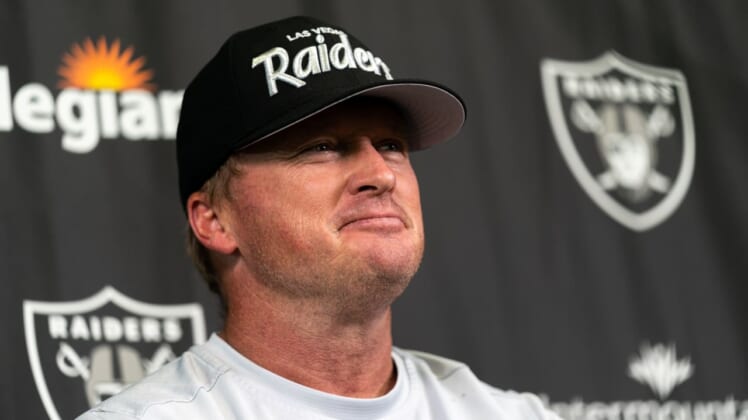 With the Las Vegas Raiders defense still very much a work in progress, the team’s success hinges on it’s high-powered offense firing on all cylinders. The past few weeks, it’s lost its identity. Here’s how Gruden and the Raiders can rediscover who they are.

Over the last few weeks, the Las Vegas Raiders haven’t played like their normal selves, specifically on offense. Typically, a Jon Gruden-coached squad establishes the ground attack and feeds off its physicality.

Since Week 11, the Raiders have averaged just 67 rushing yards per game. Before running back Josh Jacobs popped up on the Week 12 injury report with a hip issue, he recorded 17 carries for 55 yards and a touchdown against the Kansas City Chiefs.

The Silver and Black had a thrilling scoring shootout with the defending champions but narrowly lost the battle in time of possession, 32-28 minutes. In the following week, the Atlanta Falcons had a 20-point lead by the third quarter, which forced the Raiders into an unsuccessful pass-heavy counter attack. Despite a win over the New York Jets, Vegas’ ground attack didn’t bounce back and the club almost squandered a 24-13 fourth-quarter lead.

Earlier in the season, the Raiders wore down opposing defenses, controlled the ball, which kept the pressure off of a vulnerable defense, and closed games with Jacobs and Devontae Booker. We haven’t seen that since the offense ran for 203 yards against the Denver Broncos in Week 10.

Regardless of your thoughts on the Raiders’ performances over the last three weeks, we can agree they’re missing a key ingredient to their winning formula. Gruden spoke candidly about his dissatisfaction with the ground game.

“I haven’t been happy with it the last couple of games. I know our guys haven’t either. We can be optimistic, and we can be realistic. I’m going to be realistic. we got to do a better job…We feed our families with our running game. We got to be able to run out the clock at the end of the game like we did in Arrowhead. We got to be able to convert short yardage. We didn’t do that in Atlanta, and it still irritates all of us.”

Clearly, Gruden knows what’s off-center with the offense. While fans should feel encouraged to see quarterback Derek Carr win games with his arm, the Raiders shouldn’t stray away from what led them to a 6-3 record. In his words, offensive lineman Denzelle Good talked about the team’s lost identity.

“We kind of felt like we’re out of sync in the run game, but we’re trying to make that an important point to make this week as far as getting back together and re-establishing ourselves as a run team,” Good said.

The Raiders didn’t just go to the podium with shared talking points. Generally speaking, the offense has performed at an optimal level when Carr threw about 30 passes. In a pass-heavy game script, Vegas may run into some trouble as highlighted before Week 13:

Take a look at the chart above again. You’ll notice Carr threw the fewest passes during the team’s three-game win streak between Weeks 8 and 10.

You’ll also grasp a basic football principle. Teams with run-heavy game plans can keep the quarterback out of the line of fire. Even in a balanced offensive attack, pass-rushers cannot solely focus on beating down the quarterback in a rush toward the pocket. They have to exercise a little more discretion with their footwork in case a running back comes through their gap or zone.

Carr shouldn’t have to throw 47 times to beat a winless New York Jets team that hounded him in the pocket throughout the contest. Jacobs didn’t suit up for the matchup because of an ankle injury, but if the Raiders field a top offensive line, Booker should be able to rip off close to four yards per carry and bleed the clock for a comfortable victory.

Teams with run-heavy game plans can keep the quarterback out of the line of fire. Even in a balanced offensive attack, pass-rushers cannot solely focus on beating down the quarterback in a rush toward the pocket.

Booker missed a few lanes, but the linemen carry some responsibility as well. Look at the chart again. The Jets pressured Carr on almost half of his dropbacks. The Raiders offensive line has to readjust as opposing teams opt to blitz the unit in hopes of forcing errant throws and turnovers.

Getting Healthy Down the Stretch?

The Raiders may welcome back two key components to the ground attack.

According to The Athletic’s Vic Tafur, the team expects Brown and Jacobs to play Sunday.

“While coach Jon Gruden is being tight-lipped about whether Brown, running back Josh Jacobs, safety Johnathan Abram and cornerback Damon Arnette will play Sunday against the Colts, The Athletic has learned that the Raiders expect the first three to play,” Tafur wrote. “And Arnette (concussion/neck) hasn’t been ruled out yet.”

That sentiment was also expressed by Vinny Bonsignore on Silver and Black Today on Raider Nation Radio on Wednesday (hear toward end of the show below).

Gruden noted that Brown returned to practice, though Jacobs remained on the sideline.

“It’s the first time Trent has practiced with the first team in a while,” Gruden said. “We’ll see how he feels tomorrow…Josh Jacobs did not participate.”

The Raiders had become accustomed to playing without Brown, who’s missed 10 games because of a calf injury, a bout with COVID-19 and a mishap with his pregame IV that sent him to the hospital before the team’s Week 8 matchup against the Cleveland Browns.

For the most part, the offensive line performed well without him. However, let’s not dismiss the fact the unit can play much better with the 6’8″, 380-pounder at right tackle. The Raiders had been pushed around in the last few outings, so his return would come at a much-needed time, especially with an Indianapolis Colts defense that’s tied for 10th in quarterback pressures per dropback (24.3 percent) coming to Vegas.

During Wednesday’s media presser, Good’s face lit up when he talked about the sight of Brown back on the practice field.

“It’s huge to have Trent Brown back,” said Good. “You guys have seen him play. He’s going to help out our run game a ton I’m sure. Having him back is just a huge morale boost for us. Makes everybody feel better having him around. [He’s] another protector.”

During his weekly conference with reporters, Carr added further context to Brown’s impact.

“He’s the best in the world at what he does,” Carr said. “It’s just a credit to how dominant he is. You drop back and there’s nothing there. You can manipulate people more and do more things as a quarterback that you mentally want to do…He’s a dominant player in the run and pass game.”

Of course, along with the added body mass, Jacobs’ tenacious physical run style adds a much-needed boost on the ground behind the big bodies up front.

Despite all the frustrations directed at Brown because of his inability to be available, he could become the massive push Vegas needs to make a run down the stretch.

Three of the Raiders’ last four opponents rank 21st or worse against the run. The Colts are the only exception of the bunch, but they’ve allowed 14 rushing scores (ranked 22nd), so if Carr and company can move the ball down in the red zone, Jacobs and Booker should find ways to finish drives on the ground.

Whether Brown and Jacobs return or not, the Raiders have to rediscover the physical group that we saw through the first 10 weeks. This is a perfect time for the offense to become a unit of Gruden Grinders.