Jon Gruden wants to play in Oakland next season 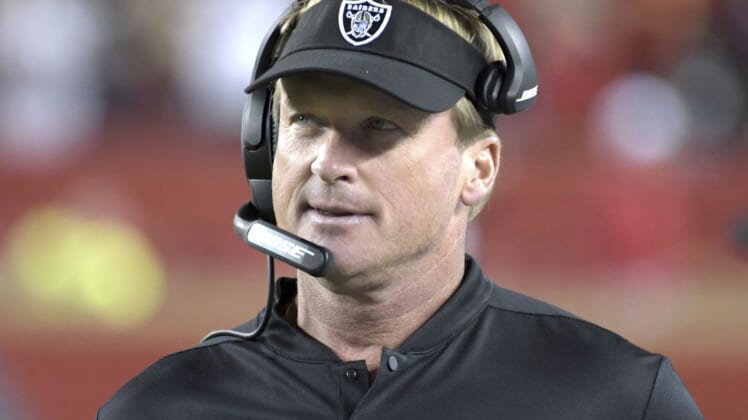 On the heels of the city of Oakland filing a lawsuit against the Raiders and the NFL, it’s becoming readily apparent that the team will be relocating from Northern California as early as next season.

It remains to be seen where the Raiders will set up shop prior to relocating to Las Vegas in 2020. San Antonio, San Diego and Sam Boyd Stadium on the outskirts of Vegas are all viable options.

But according to Raiders head coach Jon Gruden, he wants the team to remain in Oakland next season.

Raiders quarterback Derek Carr pretty much followed Gruden’s line of thinking in this regard.

“Just seems weird,” Carr told reporters on Wednesday. “It’s kind of like leaving college.” This entire situation has to feel uncomfortable to the Raiders. But it seems clear that the team will not be playing its games in Northern California.

Sources indicated on Wednesday that Levi’s Stadium, the home of the San Francisco 49ers, is not a viable option. Meanwhile, both Cal and Stanford have pushed back against the idea of the Raiders playing on campus.

For the Raiders and the NFL as a whole, it seems to make sense to relocate to Las Vegas next season. Sure there are logistical concerns about Sam Boyd Stadium, but the alternatives are not any better.