Is it time for Jon Gruden and Mike Mayock to change how they evaluate young talent? 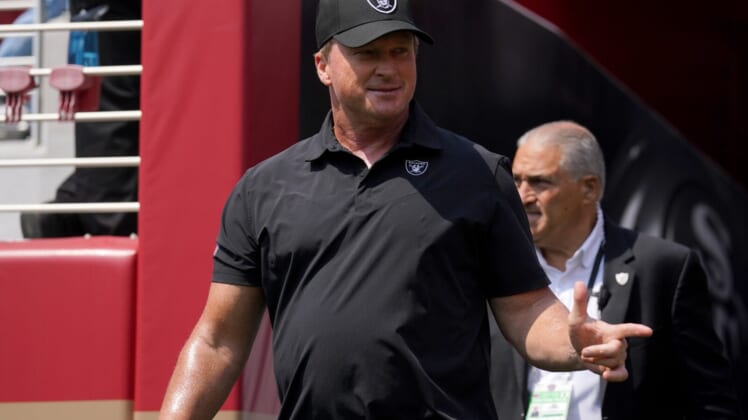 The Las Vegas Raiders made a surprising announcement Monday morning when they waived linebacker Tanner Muse. Muse is a second-year player who missed the entirety of his rookie season with a toe injury. Muse played his college career at Clemson, a school that has been a favorite of both coach Jon Gruden and general manager Mike Mayock.

The question after the Muse release on Labor Day is whether or not Jon Gruden and Mike Mayock will accept responsibility for their multitude of draft record misses. With the release of Muse, the Raiders have now released or traded two of their three 2019 third-round draft picks – before either ever played a down for the team.

Because of their own misses, as well as the fact that they traded star players Amari Cooper and Khalil Mack, the Raiders have been blessed with a plethora of high draft picks. However, the players that Jon Gruden and the Raiders drafted with that wealth of picks have been largely disappointing.

Considering that general manager Mike Mayock had a reputation as a good evaluator of amateur talent before taking the job with the Raiders, fans have been left wanting more time and time again. Muse is just the latest example of a failure to identify and develop draft picks.

While it’s easy to make Mayock the fall guy here, the reality is Jon Gruden is in full control of everything within the Raiders organization when it comes to player personnel. Whether Mayock evaluates talent one way or another ultimately doesn’t matter as Jon Gruden makes the final call on all roster decisions. If you think differently, you’re not paying attention.

This isn’t to say that Jon Gruden and the Raiders have nothing to show for their draft efforts. Taking a step back and looking at the bigger picture does leave something to be desired. With every draft pick that flames out or leaves the team before making an impact, the need for someone to take accountability grows. Is Muse the player that will mark the beginning of Jon Gruden owning and taking responsibility for the miss? Or will Mayock be the public face for Gruden and fall on his sword?

Jon Gruden going against consensus in the draft

One thing that Jon Gruden and Mike Mayock have quickly become known for when drafting is going against the popular consensus. Alex Leatherwood, Clelin Ferrell, and Damon Arnette are just a few examples of players the Raiders selected much higher than their projected draft spot.

This wouldn’t be such a talking point if so many of these picks failed to work out. At some point, the Raiders staff must acknowledge their faults in player evaluation and take that into account when making draft picks, especially early in the draft. Sometimes NFL executives can outsmart themselves and miss the truth in the face of trying to outmaneuver the competition. Whatever the reason, the Raiders’ lack of return – thus far – on their draft capital over the past four seasons is concerning.

Once again, it must be mentioned that they have had the odd success story here and there using this method. Kolton Miller is a great example of the Raiders and Jon Gruden hitting on a player many believed they drafted too high in the first round. It’s too early to judge a player like Alex Leatherwood, but the batting average hasn’t been good since Jon Gruden’s return to justify continuing to go against the consensus.

Drafting vs Player Development: Where to assign the blame?

Drafting the right player and giving them the right environment to succeed is crucial in developing impact players in the NFL. Thus, neither process can be completely excluded from blame. However, the departure of Muse and fellow 2020 third-round draft pick Lynn Bowden Jr. before he played a snap for the Raiders is concerning.

This points to the issue perhaps being more in the talent evaluation and drafting process than the player development process for the Raiders. Continued improvement from players like Kolton Miller also works as evidence against the theory that the Raiders organization is a place where prospects go to die.

Some may point to the dysfunctional and rocky tenure of former defensive coordinator Paul Guenther and the lack of player development on defense – i.e. Muse. While there are valid points with that argument, other players like Maxx Crosby and Nicholas Morrow have developed nicely.

In short, there is plenty of blame to go around for all the stages of the Raiders player development process but the drafting and talent evaluation of college players has been their biggest struggle point.

How can the Raiders improve their drafting ability?

There are two suggestions that Jon Gruden and Mike Mayock could take to help the Raiders make better draft selections.

The first would be to reduce the impact of a player moving up the draft board if there is a large difference in perception outside the organization when compared to inside the organization. Now, some may dismiss this saying: who cares what others think, we need to do what we think is right for the Raiders. While the latter is true, for whatever reason the Raiders draft board values many players higher in a draft when they could be available later. Something doesn’t add up here and it should be explored.

No one is perfect but things must get better

While it’s easy to point to the lack of success in some areas of the draft for Jon Gruden and Mike Mayock’s Raiders, there have been some gems on their watch too. The aforementioned Miller and Crosby, running back Josh Jacobs, and tight end Foster Moreau are just a few examples. Yet draft picks in the NFL are never a sure thing. You’re going to miss many of them. But to miss so consistently in the first three rounds means you have to go back to the drawing board and reevaluate your scouting and figure out how you do better.