Jon Gruden Has One Clear Expectation for Lamarcus Joyner 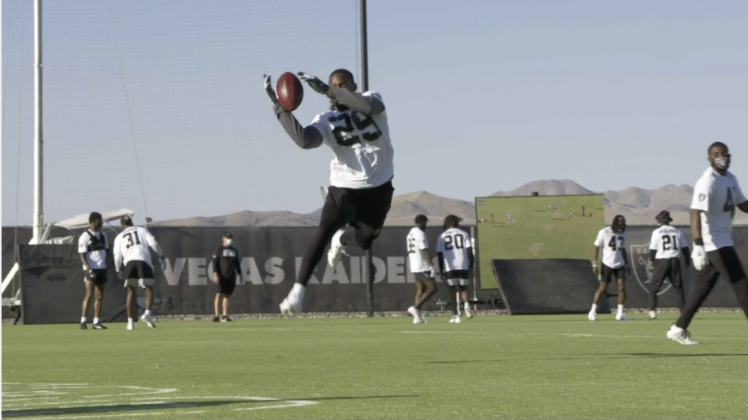 Lamarcus Joyner is a key veteran for the Las Vegas Raiders but coach Jon Gruden expects more out of him in 2020.

During the 2019 offseason, the Las Vegas Raiders made a somewhat splashy acquisition, signing Lamarcus Joyner to a four-year, $42 million deal. Needless to say, he didn’t make a strong impression in his first season.

In 2019, Joyner recorded three pass breakups without an interception and allowed a 69.4 percent completion rate. He also missed two games with a hamstring injury.

During a Zoom conference with reporters, head coach Jon Gruden took the entire defense to task, highlighting two specific aspects: turnovers and tackling. With those two T’s in mind, the Raiders lead skipper had some direct words for Joyner.

“We got to tackle better and it starts with Joyner,” Gruden said. “The nickel corner should be first or second on your team in tackles every year. That’s how it is in Guenther’s defense, so we need him to really get the ball on every single snap in our sub defense and be one of our top tacklers. That’s the number one criteria we’re looking for.”

Last season, Lamarcus Joyner tied Karl Joseph for seventh on the team in total tackles (49). He didn’t provide the impact necessary to help the defense off the field on crucial downs. The Silver and Black’s defense tied for 25th in third-down conversion percentage allowed (42.6).

In defensive coordinator Paul Guenther’s defense, Joyner has to find his way to the ball on most plays—whether that’s a key stop, a pass breakup or a takeaway. He must be involved in the action more times than not. We didn’t see that during the previous term.

Nonetheless, during a media presser, Lamarcus Joyner underscored two factors that will allow become more of a factor in 2020.

“I feel a lot more comfortable, almost feel like my second year again in the league,” Joyner said Friday. “I went to a complicated system with the Rams and Greg Williams, it takes a lot to learn with those kinds of complicated systems, [like Guenther’s]. But I feel much more comfortable and that’s going to help me with my confidence, and executing and making more plays.”

While talking about his role, we should note Lamarcus Joyner described his position as a key component to the second level of the defense, though we consider nickel backs part of the secondary.

“The nickelback position is almost like the general at the second level — not the third level with the safeties — but with the linebackers and understanding where the [defensive] end and the [defensive] tackle is fitting,” Joyner said. “So, it’s almost like you’re a cover guy and a linebacker, so you definitely have to be technique and fundamentally sound to rack up those tackles and execute.”

That’s important to note because Joyner played with a depleted linebacker group last year. Perhaps his job becomes a little easier with an improved unit on the second level along with the addition of defensive tackle Maliek Collins and defensive end Clelin Ferrell’s potential improvement.

In March, Vegas signed linebacker Cory Littleton, who played alongside Joyner as a starter with the Los Angeles Rams in 2018. The Raiders nickelback briefly discussed what it meant to reunite with a former teammate and the possible effect on his game.

“Cory and I have known each other for four seasons now. We had a good relationship in L.A. and I told Coach Gruden and Coach Paul Guenther he was a must get,” Joyner said. “With a defense like this, where you have to trust the man next to you, he’s very trustworthy and he’s going to allow the players at the safety and nickelback position to make a lot more plays, trusting that he’ll be there to help you out with leverage.”

At times, a player can only perform as well as the personnel around him. Whether at slot cornerback or safety, Joyner had some solid years with the Rams. Before he signed with the Raiders, the 29-year-old flashed the playmaking skills needed to bolster the team’s pass coverage, per Pro Football Focus:

“Over his career, Lamarcus Joyner has forced an incompletion — by way of either close coverage, a pass breakup, or an interception — on 25.0 percent of his targets in coverage, which is the best rate among the 229 safeties with at least 50 targets since 2006,” Mike Johnson of Pro Football Focus wrote back in April of 2019.

However, the question remains. Is Joyner much better at safety? Based on his previous numbers, he’s capable of solid coverage on the third level of the defense at center field (free safety), per PFF.

For now, we can lock Joyner into the slot cornerback spot, though defensive backs coach Jim O’Neil told Silver and Black Today’s Scott Gulbransen that the seventh-year pro will cross-train at safety during training camp.

Lamarcus Joyner’s future with the team hinges upon his performance in the upcoming season. The Raiders selected a driven, high-energy and ball-hawking cornerback in Amik Robertson with their fourth-round pick. He may have been a Day 2 selection if not for a groin injury. The Louisiana Tech product frequently jumped off the screen as a collegian:

While fans have been excited about Robertson, he’ll probably have to wait his turn in a transition from boundary cornerback to the slot.

Lamarcus Joyner has a $9.2 million cap hit, which ranks 17th among cornerbacks. With that said, Robertson’s fluid change of direction and ball skills (14 interceptions and 34 pass breakups in college) make him a strong candidate to step in if the veteran struggles for a second year in the slot.

The synergy between Joyner and Littleton could change the complexion of Guenther’s defense on the second level.

If not, the Raiders may have to accept that their nickelback may be better suited to force turnovers at free safety rather than rack up tackles closer to the line of scrimmage, which would raise another set of questions with a deep safety group that includes Johnathan Abram, Damarious Randall, Erik Harris and Jeff Heath.