Is Johnny Being Johnny Good or Bad for the Cleveland Browns?

As OTA’s get underway for NFL teams this week, the Cleveland Browns find themselves dealing with a different type of buzz, Johnny Manziel. Regardless of what Manziel does, it gets scrutinized by the media. Is “Johnny being Johnny” a good thing or a bad thing for the Cleveland Browns?

Before reading on, I’ll warn you that this is an opinion piece. Some of you will agree, but odds are the ones who speak up will be the ones who do not agree.

When was the last time an incoming NFL rookie caused this much media attention from a non-football related standpoint? More specifically, at the quarterback position. Maybe, Tim Tebow. Manziel gets attention for different reasons than Tebow did. Way different reasons. 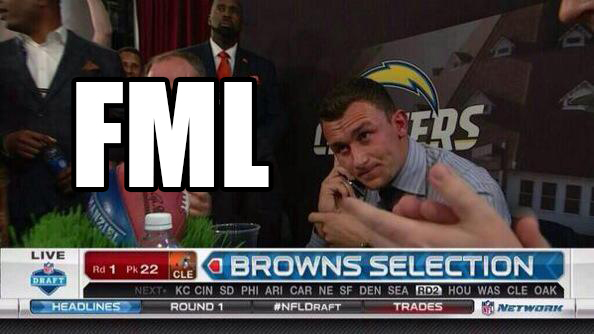 Look, you either love Manizel or you hate him. There does not seem to be much of an in-between, at least for now. With three months still to go until the start of the 2014 NFL season, should Manziel be more careful with his image now that he is no longer a college kid?

The excuse we often hear when defending Manziel’s off-field persona is…“he is just a 21-year-old kid living the way he wants to live.” This is true, as Manziel is just barely of legal drinking age. But so was Peyton Manning, Tom Brady, Aaron Rodgers, Andrew Luck, Russell Wilson and every other high-profile quarterback in the NFL. How come they didn’t have this label of “spoiled rich kid/party animal” that Manziel has?

The second defense people resort to is “Manziel has oil money, he’s going to live a lavish lifestyle.” Again, potentially true. But Manning, Wilson, Luck and others come from money too. Perhaps it is the age of social media and we see more of a player’s personal life than ever before. Even so, the top-tier quarterbacks (young and old) do not seem to have this same label or perception as Manziel.

Is it healthy for the Browns to constantly address Manziel’s actions off the field before we hit OTA’s in the NFL season? Maybe I’m an old-school 32 year old, but this would gingerly grind my gears if I were the head coach of the Browns, or worse yet, a veteran whose window is closing and is looking for success this season(insert joke here about success in Cleveland).

This is where many will tee me up for my opinion, and that is perfectly fine. I encourage it. But let’s go back to Tebow for a moment.

Tebow was absolutely blasted by the media before he even stepped foot on the field. All because of his religious beliefs. It certinaly was not his football abilities as a quarterback…there is a massive gap in talent between he and Manziel, in my opinion. And yes, that was my feeling on Tebow before he played a game in the NFL. If we were to ask some of those who were part of the Denver Broncos during the “Tebowmania” craze, would we find people who found it to be distracting? Even after winning, fans in Denver were okay with letting Tebow go. Of course it helped that Peyton Manning was his replacement. 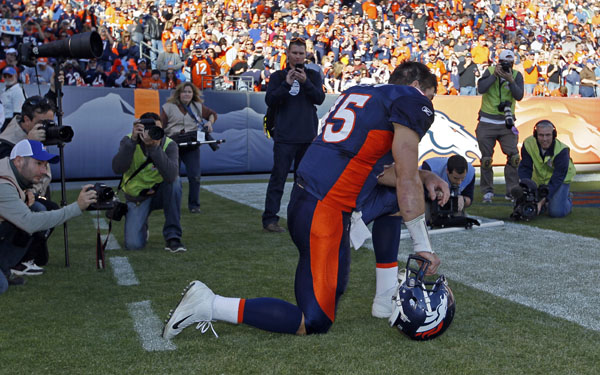 I get it. The frenzy and excitement that is “Johnny Football” does much more for a team like the Browns that it might for, say, the Kansas City Chiefs. Would Manziel’s off -field antics be as scrutinized if he were on a team that had a clear-cut starter, thus titling him as a sure-fire backup, somewhat like Aaron Rodgers in Green Bay years ago? Would the pressure be less from the fan base/players/coaches if Manziel was 99 percent certain to be a non factor his rookie year?

If you think this opinion is based off Manziel’s trip to Vegas last weekend with Rob Gronkowski, you are wrong. I have no issue with players living a personal life outside of football, as long as they aren’t breaking the law. Minnesota Vikings wide receiver Cordarrelle Patterson and defensive end Sharrif Floyd were in Vegas at the same time, yet no one knew.

With that said, Manziel and Gronk are professional athletes representing a massive brand that you, nor I, can relate to. So, before you go defending Manziel’s actions based on what you and I did as 21 year olds…don’t.

Johnny being Johnny with a side of Gronk – photo: CBS

Manziel’s Vegas trip is more of “what if” precursor. It’s not an issue right now to the Browns, as evidenced from new Browns’ head coach Mike Pettine and his comments regarding the trip (via Yahoo).

I know a big deal was made of it. Internally, we have an expectation for all our players outside the building to act a certain way. It’s really a non-issue. He’s a man and we’re going to treat our guys like that until they prove they need to be treated otherwise. He didn’t do anything illegal. I’m not going to micromanage our players outside the building

Pettine is right. For now. But what happens if Manziel is continuing to “be seen” living this so-called “lifestyle” once the season begins? You can read between the lines in regards to how the Browns are handling “Manzielmania”, they like it because it excites everyone. But what happens if Manziel doesn’t equate to victories, will they like it then?

Maybe someone should phone Tony Romo of the Dallas Cowboys and ask him if he’s treated fairly or not. Romo is notorious for letting his team down in big games. He also carries the label of “party boy” or “pretty boy who wants to hang with celebrates, rather than better his team.” Over the years, Romo has done less to promote himself off the field (he also hasn’t done much to promote himself on the field….hay-oh!), but to average NFL fan, he will always be known as choke artist.

Another comparison of perception would be Brett Favre vs Peyton Manning. Favre, who we all know was a party animal himself, had the label of “choke artist” in big spots. But he won a Super Bowl, and winning changes everything. Manning, known as one of the hardest-working NFL players of all-time, is not labelled as a “choke artist” like Favre, yet has the same number of Super Bowl rings. Manning has thrown his share of bad passes in big games, no question. But why is Favre labelled more of a choke artist than Manning? Is it a case of stats (Favre owning the NFL record for career interceptions for example) or a case of perception throughout their careers?

If you’re Brian Hoyer, you’re doing cartwheels after seeing those pictures of Johnny in Las Vegas because it helps him. I don’t see how that weekend helps Johnny. Look he didn’t do anything wrong or bad.… But all players aren’t created equal. You’re held to a higher standard as the face of the franchise.

See, two sides of the fence. Pettine, the head coach, is fine with Manziel living the way he wants, as long as he puts football first. Gannon, a former player, sees it as a potential distraction to Manziel’s teammates if he continues to “be seen” as a party animal.

Again, winning changes everything (for a while). If Manziel is the starting quarterback Week 1, and leads the Browns to a playoff appearance in 2014, people will be okay with “Johnny being Johnny.” For me, personally, you have to earn the excuse of “Johnny being Johnny” by winning.

Look no further than Boston Red Sox great Manny Ramirez. Ramirez made “Manny being Manny” famous due to his antics on, and off, the field. That said, the Boston Globle quotes Ramirez as saying he should have behaved more while in Boston. Here are some quotes from Ramirez: 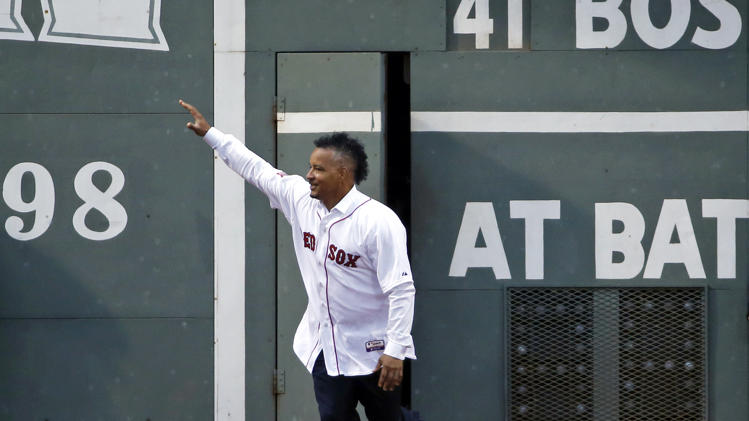 In regards to his new position as player/coach for the Iowa Cubs, a AAA minor league affiliate of the Chicago Cubs, Ramirez had this to say:

That’s a blessing from God, I can go over there and give those kids my testimony, what to do in the field and what not to do off the field. It’s going to be a blast. We’re going to go out and have fun out there.

Even David Ortiz admits that Ramirez should have been smarter back in the day:

I tell you what, man, Manny, he did so many things back then. It was him being himself. The Manny that you look at today is a whole totally different guy. We talk, try to stay in touch. He is different. Good for him and his family and for people to understand that people crash into a hard wall, and they start figuring things out a better way.

See how winning changes everything? Ramirez earned the excuse of “Manny being Manny” (sorry, no PED jokes here). It’s not exactly the same situation as Manziel, as Ramirez did not have any buzz prior to playing a game in the majors, but the point is still the same. Perhaps Manziel should earn “Johnny being Johnny” in the NFL, rather than build on the perception he he already has.

Personally, I feel Manziel needs a new public relations person (Johnny, if you are reading this, you probably do not like me…but I can send you my resume and I’ll do it for half the price). Here is my first tip: stop making the “money” sign in every picture. Think how different the perception of his Vegas trip would be had he just been standing there with Gronk and those good looking ladies. No posing, just a random photo someone took and posted to Instagram. Heck, even if he just smiles and takes a picture with a group of people, it would not look as if he is bragging about his lifestyle (“oil money” or not). 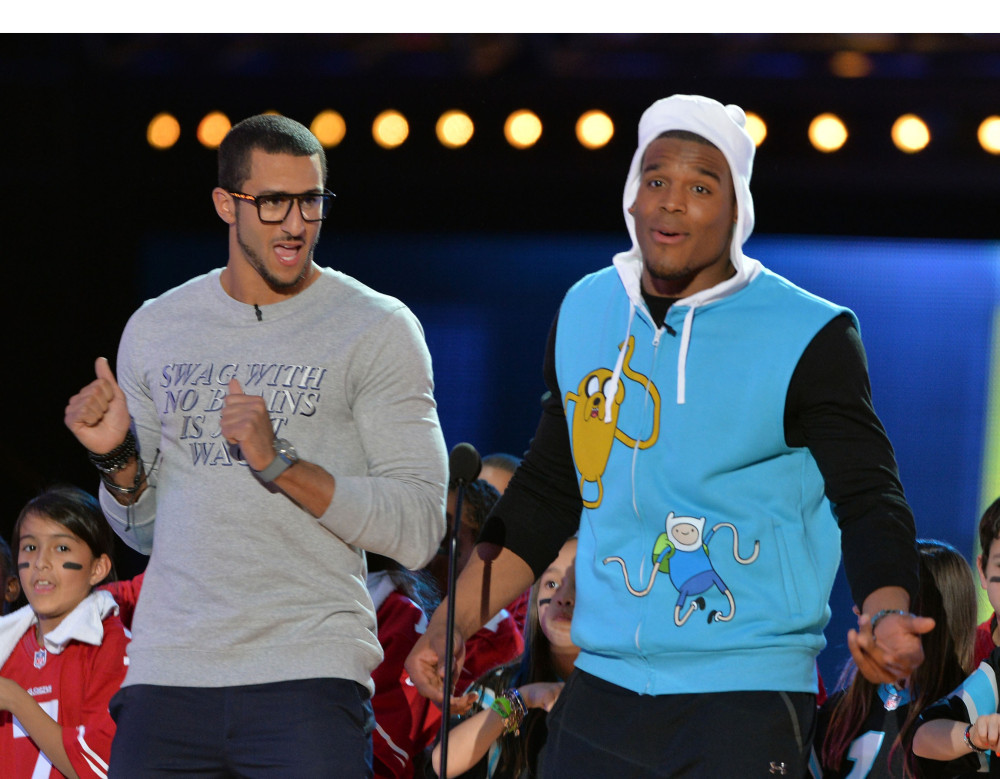 Yes, I get there is marketability to the “money” pose. Tebow, Newton, Rodgers and Colin Kaepernick all have something now. Of course, Rodgers is the only one who has backed up his dance with a ring, but that’s a conversation for another day.

Back to Manziel. Why not work on changing your image, at least temporarily, by letting your results on the field create an identity for you? Prove people wrong. It is a much easier hole to dig out of if you are winning. Good luck ditching that “party animal” label if things go South in Cleveland.

I’ll end with this: Professional athletes live a different life-style than you and I…that is a fact. There is nothing wrong with the work hard/play hard mentality if you have earned it. You can do a quick Google search and find dirt on any player these days. However, I find it interesting that you will find far less dirt on the quarterbacks who were in the postseason last year, than you will for the other quarterbacks in the league and those that have fizzled out. It’s up to Manziel to decide how he wants to be viewed. Perception can be an gnarly thing.