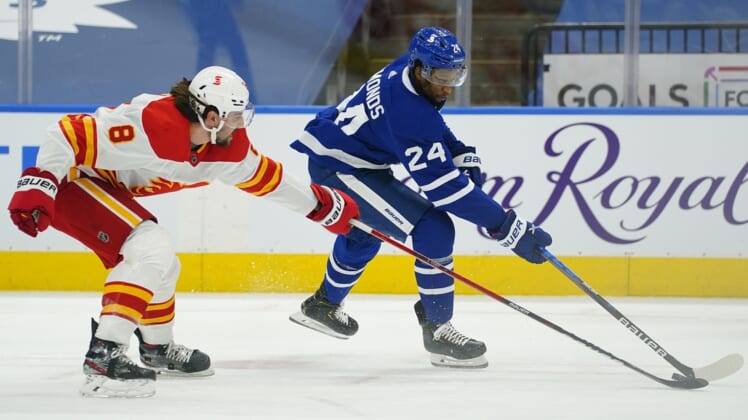 Johnny Gaudreau scored 36 seconds into overtime to give the visiting Calgary Flames a 3-2 victory over the Toronto Maple Leafs on Tuesday.

Following a 1-8-0 stretch, the Flames have now won consecutive games. The win moves Calgary six points behind the Montreal Canadiens for the fourth and final North Division playoff berth.

Gaudreau and Elias Lindholm each had a goal and an assist for Calgary. Juuso Valimaki scored the Flames’ other goal.

Zach Hyman had a goal and an assist for the Maple Leafs, while John Tavares had two assists. Alexander Kerfoot also scored for Toronto.

Toronto lost for the second consecutive night, after dropping a 4-2 result in Montreal on Monday. The Leafs are 9-1-2 over their last 12 games.

Milan Lucic played in his 1,000th NHL game, and marked the occasion with the primary assist on the game’s opening goal.

At 4:37 of the first period, Lucic passed to a wide-open Valimaki in the opposite circle. Valimaki had plenty of room to blast a one-timer for his second goal of the season.

The Leafs equalized six minutes later. Morgan Rielly’s shot deflected off the boards and right to Hyman at the side of the net. Hyman deposited the chance to extend his points streak to six games.

The Flames deployed a defense-first strategy, using some aggressive neutral-zone checking to limit the high-powered Leafs offense to just 13 shots in the first two periods.

However, the Maple Leafs rebounded with 12 shots in the third period, highlighted by Kerfoot’s goal at the 6:17 mark.

Toronto couldn’t score during a four-minute power play during the final period.

Flames goalie Jacob Markstrom stopped 24 of 26 shots for the win.

David Rittich stopped 25 of 28 shots in his Maple Leafs debut. Acquired in a trade with Calgary on Sunday, Rittich looked solid making the short-notice start against his former team.

The Maple Leafs won the overall season series with the Flames by a 6-2-1 margin.