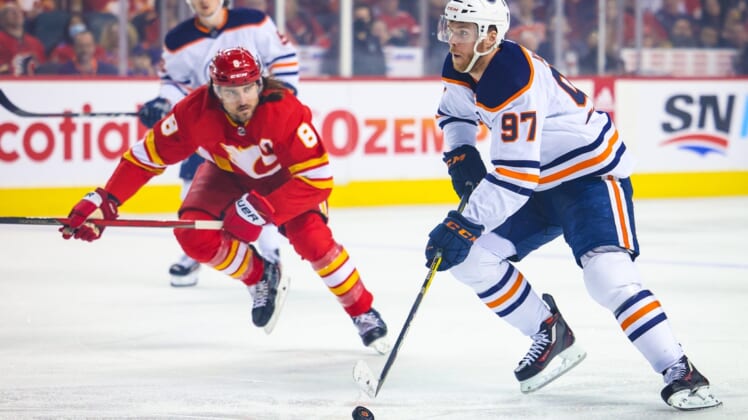 Johnny Gaudreau collected a career-best five assists and Matthew Tkachuk netted two goals and two assists to pace the host Calgary Flames to an 9-5 victory over the Edmonton Oilers on Saturday.

Elias Lindholm and Mikael Backlund both scored twice, while Chris Tanev scored once in a three-point outing. Oliver Kylington and Dillon Dube added singles for the Pacific Division-leading Flames in the Battle of Alberta clash. Goaltender Jacob Markstrom made 26 saves.

Both teams have been among the league’s hottest clubs the last couple of months, reminiscent of their rivalry at its peak in the 1980s, and delivered a scoring barrage that harked back to those days too.

After Brassard opened the scoring 32 seconds into the clash, the Flames responded. Lindholm tied the game when he buried a breakaway chance at 5:28, and then Tanev and Backlund scored 16 seconds apart to earn a 3-1 lead at 14:39 of the opening frame.

Draisaitl buried a breakaway opportunity in the final minute of the first period, and then scored on the power play 44 seconds into the second period to tie the clash.

Kylington netted a tap-in tally set up by Gaudreau at 3:07 of the second period, but Nugent-Hopkins again tied the game 45 seconds later with another man-advantage marker.

That’s when the Flames pulled away. Tkachuk scored twice, both thanks to incredible passes from Gaudreau, to make it 6-4 at the 7:39 mark of the middle frame. After Draisaitl notched his 47th goal of the season just before the midway point, the Flames put down the hammer.

Seconds after a clutch Markstrom save on Evander Kane, Lindholm scored his 34th of the season at 2:55 of the third period. Backlund notched his second of the night just over three minutes later, and Dube rounded out the scoring at the 14:23 mark of the wild affair.