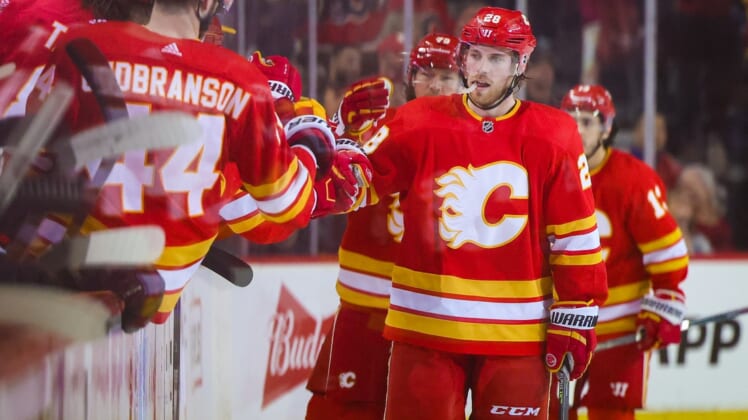 Johnny Gaudreau finished with a goal and two assists, and Matthew Tkachuk added one of each to lead the host Calgary Flames to a 4-2 victory over the Arizona Coyotes on Friday.

Tkachuk netted his 30th goal of the season when he opened the scoring 33 seconds into the second period. He first won a puck battle deep in the zone before completing a give-and-go with Gaudreau.

Lindholm doubled the lead three minutes later with his team-leading 32nd goal of the season. Lindholm was parked in the slot during a power play, and converted a one-timer set up by Tkachuk.

Then it was Gaudreau’s turn to hit the 30-goal mark at 8:14 of the period. The speedy winger was sprung on a breakaway and ripped a high shot for his 200th career goal. Those three and Andrew Mangiapane give the Flames four 30-goal scorers for the first time since the 1993-94 season.

Carcone, who led the Coyotes’ AHL team in goals, collected his memorable marker in his fourth NHL game by burying a perfect shot with 11.4 seconds remaining in the middle frame.

However, Andersson restored the three-goal edge when he collected another power-play goal 5:21 into the third period, his fourth tally of the season.

Kolyachonok, playing his 18th career game, rounded out the scoring with 1:53 remaining.

Of note, Flames veteran Sean Monahan was a healthy scratch in what’s been a tough season after major surgery last summer. As well, Coyotes forward Phil Kessel played his 964th consecutive game, which ties him with Doug Jarvis for second spot on the league’s all-time list.