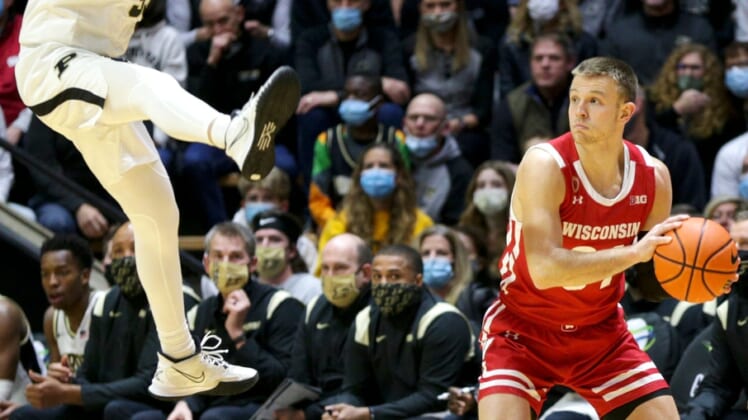 Wisconsin guard Brad Davison (34) looks to pass the ball as Purdue guard Sasha Stefanovic (55) flies through the air after jumping to block an attempted pass during the first half of an NCAA men’s basketball game, Monday, Jan. 3, 2022 at Mackey Arena in West Lafayette.Bkc Purdue Vs Wisconsin

Johnny Davis had career highs with 37 points and 14 rebounds to lead No. 23 Wisconsin to a 74-69 road upset of third-ranked Purdue in a Big Ten Conference game Monday night at West Lafayette, Ind.

Davis’ stepback jumper capped a 10-1 run to put Wisconsin in front 70-63 with a minute left. Zach Edey scored inside, but failed to convert the three-point play, but then scored again down low to cut the lead to 70-67 with 20 seconds left.

Brad Davison hit two free throws to put the Badgers up 72-67 with 12.3 seconds remaining. Edey’s quick dunk made it 72-69, but Davis closed it out with a dunk at the other end.

Davis made 13 of 24 shots to surpass his previous career best of 30 points against Houston in the Maui Invitational.

After a season-low first-half scoring output, Purdue erased a 29-24 halftime deficit with a seven-point run after the break.

Ivey’s lay-in put the Boilermakers up 49-42, but Wisconsin rallied to regain the lead at 52-50 on Davis’ 3-pointer with just over nine minutes remaining.

Edey scored on a putback to cap a six-point run for a 62-60 lead with just under four minutes remaining.

Wisconsin was hampered by foul trouble up front as 7-footers Steven Crowl and Chris Vogt, and forward Tyler Wahl, each had four fouls with 12 minutes remaining. Vogt fouled out at 8:17, Wahl with 2:11 left, and Crowl with 52 seconds remaining.

The Badgers made just 1 of 12 3-point attempts in the first half, but countered with an 18-4 advantage in points in the paint. Wisconsin missed its first nine attempts from beyond the arc before Hepburn’s 3-pointer put the Badgers up 21-17.

Mason Gillis hit all three of his 3-point attempts, while the rest of the Boilermakers were 4 of 19 from the floor in the first half.