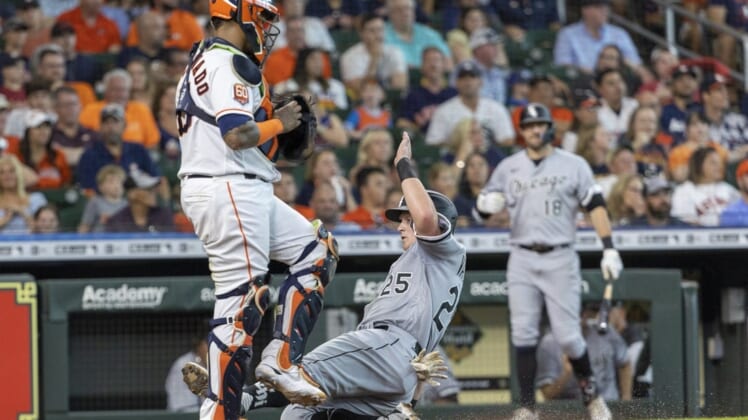 Johnny Cueto twirled a season-best seven shutout innings while Andrew Vaughn and Luis Robert recorded three-hit games as the visiting Chicago White Sox cruised to a 7-0 victory over the Houston Astros on Saturday.

Cueto (1-3) worked a combined 12 scoreless innings over his first two starts with Chicago after May 16. In four subsequent appearances, he posted a 5.32 ERA while surrendering a .785 opponent OPS and almost as many runs (15) as strikeouts (16) over 23 2/3 innings.

He reclaimed his mid-May form against the Astros on Saturday.

After allowing a leadoff single to Jose Altuve in the first, Cueto induced Michael Brantley to line into a double play before retiring the ensuing nine batters. He worked around a two-out walk to Alex Bregman in the fourth inning and did not allow another baserunner until Martin Maldonado walked with one out in the bottom of the sixth.

Bregman notched the second hit off Cueto leading off the seventh, but Cueto immediately induced a double-play grounder off the bat of Yordan Alvarez before capping his outing by getting Kyle Tucker to fly out to center.

Robert was instrumental in the ambush of Astros right-hander Justin Verlander (8-3).

His two-run, opposite-field single to right field drove home Seby Zavala and Danny Mendick, providing the White Sox a 2-0 lead with one out in the third. Robert scored behind Vaughn when Jose Abreu added a two-run double that extended the White Sox advantage to 4-0.

An inning later, Robert (3-for-5, four RBIs) chased Verlander with a two-run double that plated Adam Engel and Vaughn (3-for-5), who reached on a critical two-out fielding error by Altuve that allowed Josh Harrison to score for a 5-0 lead.

While compiling seven runs in the third and fourth innings, the White Sox recorded five hits to the opposite field.