Out for season with a shoulder injury, how will Johnathan Abram’s Raiders future play out? 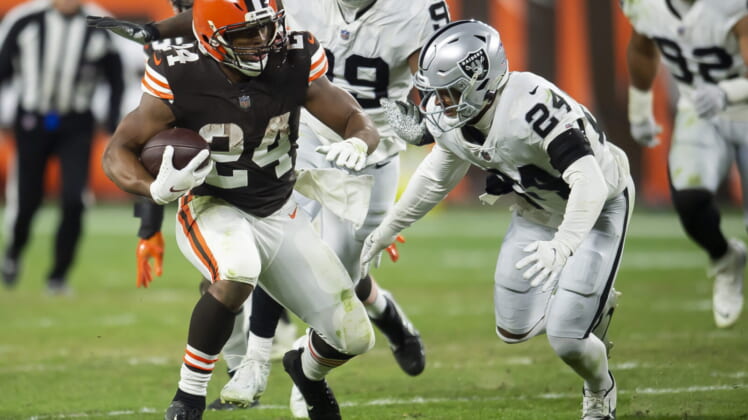 On Wednesday, the Las Vegas Raiders placed Johnathan Abram on injured reserve. He wanted to play through a dislocated shoulder but listened to doctors and opted to undergo surgery Thursday, per NFL Network’s Tom Pelissero.

Going into Week 16, Abram has the second-most tackles (116) among Raiders defenders only behind 2021 Pro Bowl linebacker Denzel Perryman. On Monday against the Cleveland Browns, he had one of his best games with nine tackles (six solo) and two for loss in one half.

The Raiders will miss Johnathan Abram as they prepare to face a couple of top-10 rushing attacks in two of their last three games, starting with the Denver Broncos Sunday followed by the Indianapolis Colts’ ground attack, which features Jonathan Taylor, who leads the league in rushing yards (1,518) and touchdowns (17).

Looking ahead to 2022, Vegas has to make a decision on Abram’s fifth-year option, which would cost the club around $7.9 million, per Over the Cap (h/t Josh Dubow of the Associated Press).

Johnathan Abram and his 5th-year option

Despite improvements in certain areas, Johnathan Abram will probably play through his fourth season in a contract year, meaning the team won’t exercise his fifth-year option.

In today’s league, with an increasing number of pass-catching running backs and tight ends, defensive coordinators find it difficult to hide safeties in coverage, which is an issue with Abram.

In 2021, a safety who struggles to track the ball and stay with pass-catchers downfield fares a lot better in a hybrid safety-linebacker role or as a nickel linebacker if he’s a reliable tackler.

Assuming Abram plays at least one more season with the Silver and Black, the new coaching staff should take notes on how defensive coordinator Gus Bradley used him.

In fairness to Abram, former defensive coordinator Paul Guenther didn’t put him in the best position to succeed—literally.

Last year under Guenther, Johnathan Abram played most of his snaps at free safety where he’s expected to fulfill deep coverage duties and read the quarterback from center field as the last line of defense in the secondary. As noted above, he surrendered too much real estate on the back end.

This year, Bradley used Abram primarily in the box where he can move downhill in most situations as opposed to playing eight to 10 yards beyond the line scrimmage.

Opposing quarterbacks still managed to isolate Abram or target him in coverage. He had been targeted 72 times this year compared to 33 times last year, but the hard-hitting safety keyed in on the underneath routes where he can make a tackle and move on to the next down instead of playing the deep ball.

Bradley understood Abram’s strengths and didn’t try to forcefully fit him in a position that didn’t suit his best attributes. Guenther seemed stubborn in that regard.

Over the last two terms, Abram had some whiffs, but he missed fewer tackles this season compared to the previous term, down from 13.1 percent to 10.1 percent. He also showed more discipline, committing just two penalties in 955 defensive snaps compared to five infractions in 2020, per PFF.

Here’s the problem with using Johnathan Abram as a physical presence in the box—he has durability issues.

In three seasons, Abram will miss 21 games. As a rookie, he tore his rotator cuff and labrum in the season opener, which sidelined him for the remainder of the campaign. In 2020, the Mississippi State product sat out two games because of a knee injury and a concussion with a one-week absence on the reserve/COVID-19 list.

Most concerning, over the last two years, Abram has undergone shoulder surgery twice. With his physical playing style, he’s a risky investment even in the appropriate scheme for his skill set.

The Raiders will likely bring in new coaches in 2022. Whoever takes over the defensive play-calling duties, should continue to use Abram closer to the line of scrimmage.

In addition to that, Abram could play a bigger role in the pass rush if the new coordinator utilizes blitz packages more often than Bradley, who prefers to rush four defenders. Because of his speed and athleticism, he can rack up a handful of sacks in a season as part of an aggressive system. Though first and foremost, the 25-year-old has to stay healthy.

Keep in mind, the Raiders drafted Divine Deablo and Tyree Gillespie in the third and fourth rounds, respectively, this year. The former has performed well in limited action. Both defenders could play in the box and steal some time from Johnathan Abram if the new coaching staff prefers to develop younger talent over a player on the back end of his contract.