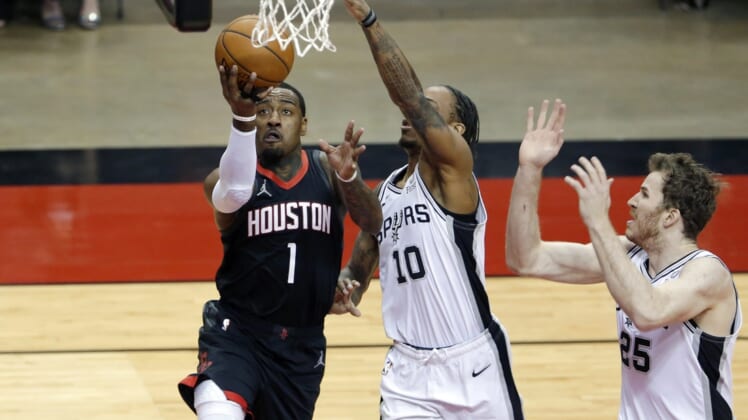 Houston Rockets guard John Wall will visit the nation’s capital for the first time since being acquired from the Washington Wizards prior to the 2020-21 season.

Wall likely won’t hold anything back on Monday when he takes the court against the team that selected him with the top overall pick of the 2010 NBA Draft.

He also didn’t hold anything back in a recent interview with The Athletic, claiming that the organization didn’t discuss the potential trade involving him and former NBA MVP and nine-time All-Star Russell Westbrook in December.

“I felt like I deserved the honesty and respect because I’ve been there for 10 years,” Wall said. “I’ve been through the bad times, when we had (expletive) teams and when we had good teams in D.C. I never turned my back on the organization.

Wall signed a four-year, $170 million extension in 2019 before missing the ensuing 2019-20 season due to multiple injuries.

Wall has returned with a flourish, averaging 19.5 points and 5.9 assists in 17 games this season. He scored 24 points in Houston’s 107-88 home win over Washington on Jan. 26 and had 26 points on Saturday, but the reeling Rockets sputtered to their season-high fifth straight loss with a 121-99 defeat against the New York Knicks.

The five-game losing skid coincides with the absence of Christian Wood (sprained right ankle), who is averaging 22.0 points and 10.2 rebounds this season.

DeMarcus Cousins has recorded three double-doubles in the five-game stretch while starting in place of Wood.

“This is the NBA, you go through these types of moments,” Cousins said of the losing skid.

“It’s a long season. You’re gonna have good moments, you’re gonna have bad. It’s about staying even keel, working through the bad part. As of right now, I think we’re probably at our lowest that we’ve been all season, so we don’t have anywhere but up to go from here — so that’s something to look forward to.”

Bradley Beal, who scored 33 points in the first meeting with Houston, returned from a night off to score 35 in the Wizards’ 104-91 victory over the Boston Celtics on Sunday. Looking refreshed, the NBA’s leading scorer made his first five shots in the first quarter and finished 10 of 18 from the floor.

Westbrook, however, has yet to play in both games of a back-to-back set this season.