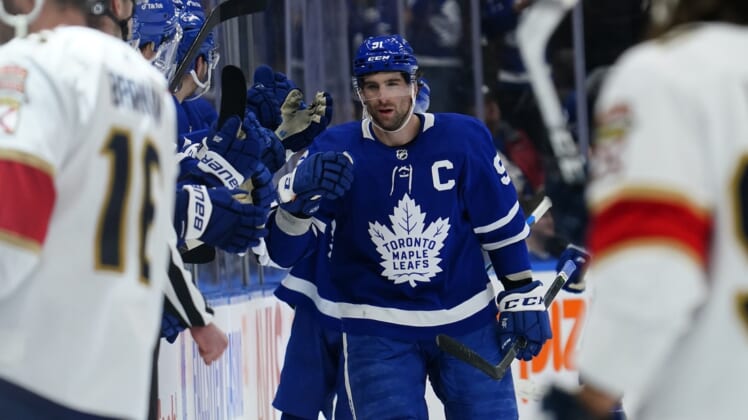 Ilya Mikheyev and Auston Matthews (empty net) also scored for the Leafs, who have won four of their past six games. Mitch Marner added three assists to give him 302 for his career.

Brandon Montour and Ryan Lomberg scored for the Panthers, who completed a 4-2-1 trip.

Rielly scored 49 seconds into the first period. The Maple Leafs have scored in the first minute in their past two games. They scored 36 seconds into Saturday’s game, a 4-2 loss to the Montreal Canadiens.

It was the seventh goal of the season Sunday for Rielly, who deflected TJ Brodie’s shot from the left point. Matthews also had an assist.

Montour scored his eighth goal at 10:11 of the first period on a shot from the left circle. Jonathan Huberdeau made a no-look pass from the corner to Sam Bennett, who made the cross-ice feed from the right circle.

Florida had an 11-7 advantage in shots on goal after the first period.

After a Toronto turnover near the goal, Lomberg scored his sixth of the season from the lower edge of the left circle at 1:27 of the second period.

Toronto led 3-2 after Tavares scored two straight power-play goals in the second period. He put in a rebound at 5:10 with Radko Gudas off for roughing.

A deflection on Marner’s pass at 11:12 gave Tavares his 22nd goal this season. Huberdeau was off for hooking.

Each team had 20 shots on goal after two periods.

Mikheyev scored his 14th goal of the season on a backhand at 9:12 of the third period to complete a 2-on-1 with Marner.

Knight was removed for an extra attacker with four minutes left in the third period, and the Panthers tested Mrazek several times.

The game was the first of three scheduled meetings between the teams this season.