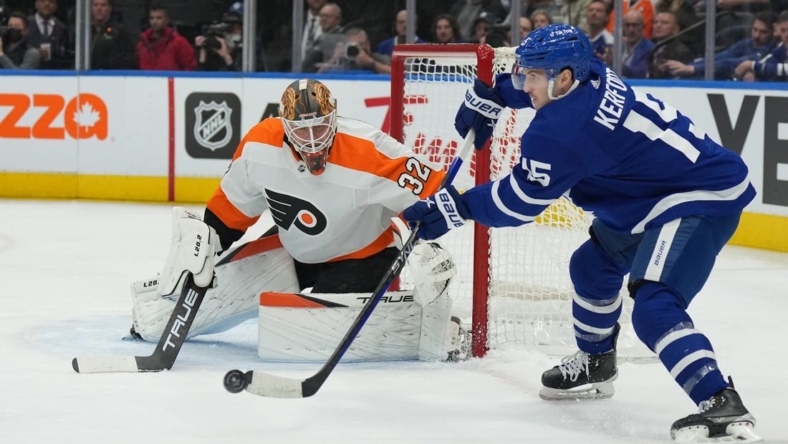 John Tavares had three goals and an assist, and the Toronto Maple Leafs defeated the visiting Philadelphia Flyers 5-2 on Wednesday night.

It was the 11th career hat trick for the Maple Leafs captain.

Auston Matthews and Zach Aston-Reese also scored for the Maple Leafs, who had lost four in a row. Mitchell Marner and Morgan Rielly each added two assists.

After the Flyers killed off two penalties, they took the lead on Farabee’s third goal this season at 13:09 of the first period. His laser shot from the left circle went in off the post. Konecny and Travis Sanheim earned assists.

The Maple Leafs took the lead with two goals 1:53 apart during the first period.

Matthews tied the game with his fourth goal of the season on a power play at 16:40 of the first. He knocked in his own rebound after Tavares’ precise backhand pass from behind the goal. Marner also had an assist. Nicolas Deslauriers was serving a tripping penalty.

Tavares completed an industrious shift with a goal on a shot from above the right circle and off the crossbar. William Nylander and Rielly picked up assists.

After two periods, Toronto had a 30-15 advantage in shots on goal.

Aston-Reese gave Toronto a two-goal lead with his first goal of the season at 2:49 of the third. Denis Malgin and David Kampf earned assists.

Tippett scored on a power play at 7:01 of the third with a wrist shot. Konecny and Scott Laughton got assists. Tavares was off for holding.

Tavares scored after working his way from the right boards to the front of the goal at 12:42 of the third. Marner and Victor Mete assisted.

Tavares scored his seventh goal of the season on a power play at 15:23 of the third to cap the scoring. Zack MacEwen was off for hooking.