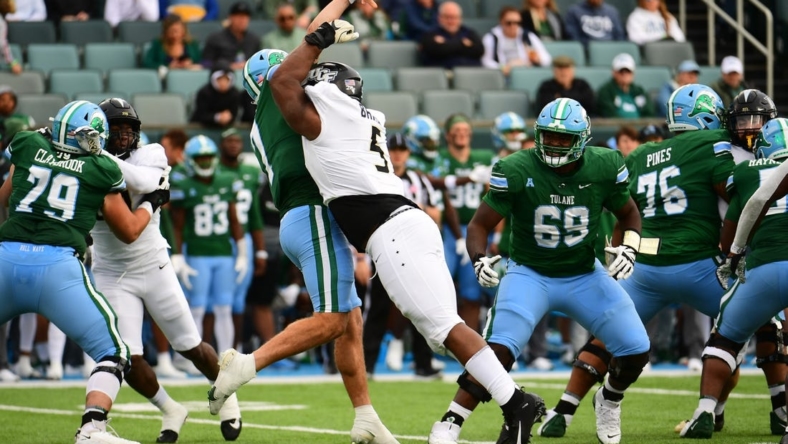 John Rhys Plumlee ran for two touchdowns and threw for another to lead No. 22 Central Florida to a 38-31 victory over host No. 17 Tulane in American Athletic Conference play on Saturday in New Orleans.

Plumlee rushed for 176 yards, including touchdowns runs of 67 and 9 yards, on 18 carries and went 17-for-30 passing for 132 yards. Javon Baker had five receptions, including an 8-yard touchdown, for 54 yards for the Knights, who have won eight of their past nine games.

Michael Pratt went 23-for-39 passing for 236 yards and three scores for Tulane. Tyjae Spears ran for 130 yards on eight carries and Jha’Quan Jackson had five receptions for 95 yards for the Green Wave, who ended their five-game winning streak.

Central Florida (8-2, 5-1), Tulane (8-2, 5-1) and two-time defending league champion Cincinnati (8-2, 5-1) are tied atop the American Athletic Conference standings. The top two teams will meet in the title game on Dec. 3. Tulane closes the regular season on Nov 25 at Cincinnati, which lost to Central Florida on Oct. 29.

Leading 24-14 at halftime, Central Florida extended its lead to 31-14 on Plumlee’s 9-yard run that capped an eight-play, 83-yard drive with 8:58 left in the third quarter.

Valentino Abrosio’s 23-yard field goal pulled the Green Wave to within 31-17 with 3:41 left in the quarter before Pratt’s 2-yard scoring toss to Reggie Brown made cut the margin to seven with 11:39 left in the game.

Isaiah Bowser’s 1-yard touchdown run, his second of the game, made it 38-24 with 3:32 to go before Tulane capped the scoring on Pratt’s 6-yard touchdown pass to Shae Wyatt with 1:46 remaining.

After Plumlee’s 47-yard run set up Colton Boomer’s 25-yard field goal on the Knights’ first possession, Plumlee’s 67-yard touchdown run on Central Florida’s next possession extended the lead to 10-0 less than five minutes into the game.

Tulane trimmed the lead to 10-7 on Pratt’s 1-yard touchdown pass to Duece Watts on its ensuing possession. But Central Florida countered when Bowser scored on a 2-yard run to make it 17-7 with 2:24 left in the opening period.