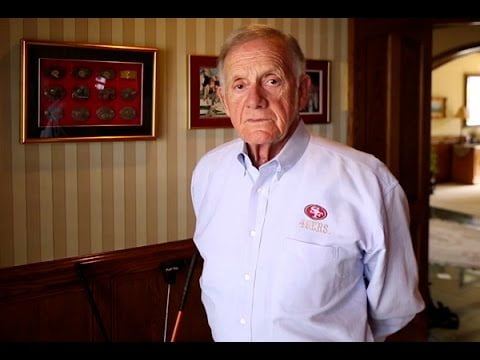 A member of the San Francisco 49ers organization during their glory days of the 1980s and 1990s, John McVay is one of the reasons this team made it to the NFL’s mountaintop during his time with them.

Sadly, McVay is no longer with us. The 49ers announced on Tuesday that McVay has passed away at the age of 91.

“This is a very sad day for our organization and the entire football community. John McVay was a driving force in constructing teams for our five Super Bowl titles. More importantly, John was a Hall of Fame person who built genuine and sincere relationships with front office staff, coaches and players.

John’s commitment and contributions to the 49ers created the standard and tradition we strive to carry on today. Our thoughts and prayers are with the McVay family.”

A native of Ohio, McVay played college ball at Miami-Ohio. He began his career in the NFL as an assistant with the New York Giants in 1976 before ultimately taking over as their head coach later that year. From 1976-78, McVay posted a 14-23 record.

He ultimately joined the 49ers’ organization as their vice president back in 1980, working with head coaches Bill Walsh an George Seifert until 1994. That span saw the 49ers win five Super Bowls with John McVay playing a large role in constructing those dominating teams. He returned to be the 49ers general manager from 1998-1999 before retiring.

Our thoughts go out to the entire McVay family and the 49ers’ organization during these most difficult of times.