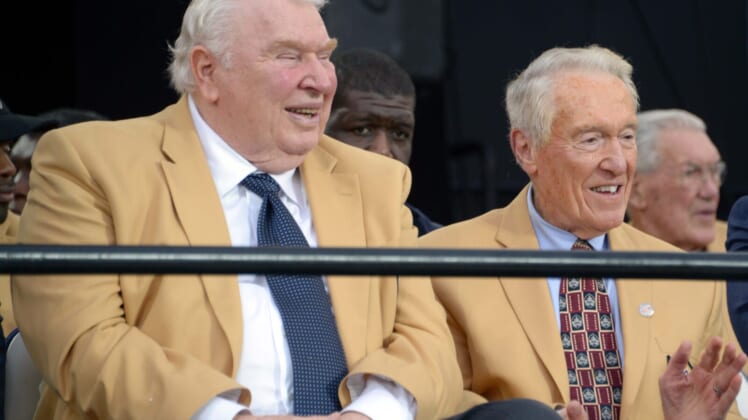 John Madden, who passed away on Dec. 28, was the head coach of the Oakland Raiders for 10 years and helped lead the franchise to its first Super Bowl win in 1977.

During his time as the head coach for the Silver and Black, he recorded 103 wins and in six of those 10 seasons, the Raiders recorded double-digit win totals.

Following the news of Madden’s passing Tuesday afternoon, the Raiders’ organization paid tribute to the legendary coach by turning off all the lights at Allegiant Stadium until 6 p.m. in honor of the original kickoff time for Monday Night Football. In addition, the torch inside the stadium was lit in honor of Madden.

Las Vegas Raiders players and coaches have their own recollections of Madden, whether it is from his coaching style, the way he presented himself in the booth as a color commentator, or even the numerous video games he created and improved year after year.

Interim head coach Rich Bisaccia said his first time he talked with John Madden was during his first coaching job with the Tampa Bay Buccaneers.

“We lost an icon in the world of football and it’s hard to say you can find another person that has gone through all the genres that he’s gone through and been ultra-successful,” Bisaccia told the media Wednesday afternoon. “I had the chance to meet him when I was a coach in the NFL in Tampa and came through. I had the chance to shake his hand and it was like my hand disappeared.

“He was such a big man and he lit up the room. He had this way in which he made everyone else in the room feel really good about themselves when they’re actually excited about meeting coach Madden.”

When it comes to coaching, Bisaccia said he remembers the motivation Madden had while he was coming up the football coaching ranks.

“I think the one thing that always comes to mind as a young person watching him on the sideline was his energy, enthusiasm and his zeal for football,” Bisaccia said. “For me personally, I would say, him jumping up and down, and his hands. I remember when he did the beer commercials, he came out of the paper and threw his hands. If you looked at the sideline, his hands were always in motion.”

Not only did John Madden have an impact as a coach, broadcaster and video game enthusiast, but also on players during his decade on the sidelines.

Bisaccia said the impact the 2006 Pro Football Hall of Fame inductee had on players was so vital, especially for a coach that has the highest winning percentage with at least 100 victories and did it while in his 30s and early 40s.

“It became very obvious when he got involved with the All-Madden team and his evaluation, thoughts on players and how that became so popular within the National Football League,” Bisaccia said. “And then those guys playing to be on the All-Madden team. It’s something everyone wanted to do because he had such an affinity for players.”

Although Carr does not have any personal recollections, he rekindles the memories of the video games and stories he has heard from past teammates and coaches.

“Oh yeah. I’m probably the best at his video game of all time,” Carr said. “I didn’t get much time to be around him. The times he did come by it was very brief in my eight years here. But hearing stories – some really cool stories – about him from some of the guys throughout the years such an amazing man, so kind, always everyone said he was a coach. He was definitely always a coach.”

Carr’s family has been around the game from his brother David, who had a 10-year career with four different organizations and has been an analyst for NFL Network since 2016.

However, it was Carr’s uncle Lon Boyett, who spent time with the San Francisco 49ers, Tampa Bay Buccaneers and the Oakland Raiders that has the family memory with Madden.

“I didn’t have any personal stories or anything like that,” Carr said. “I know my uncle got into a fight in training camp one year and coach Madden ran over to stop it and he actually slipped and got all muddy. My uncle thinks that’s the reason why he got cut one of the times. It’s cool family stories for us to share and talk about. I didn’t know him personally, but when he was around being able to talk to him and see him was pretty cool.”

For today’s NFL players like Carr, they grew up as the Madden video games were being released year after year, including for right tackle Brandon Parker.

Parker, 26, said he recalls the history Madden had in the game of football, both on the field and in front of a screen.

“It’s been nothing short of legendary,” Parker said. “We all grew up playing Madden. I remember my first Madden was 2002 and I played it every year until I’m actually on the game. You hear his voice, you hear him broadcasting, you know the guru of football that he was, and for the (Raiders) organization, what he’s done for the game and for most of us NFL players in this building, you can’t put it into words. We we’re all devastated for his passing.”