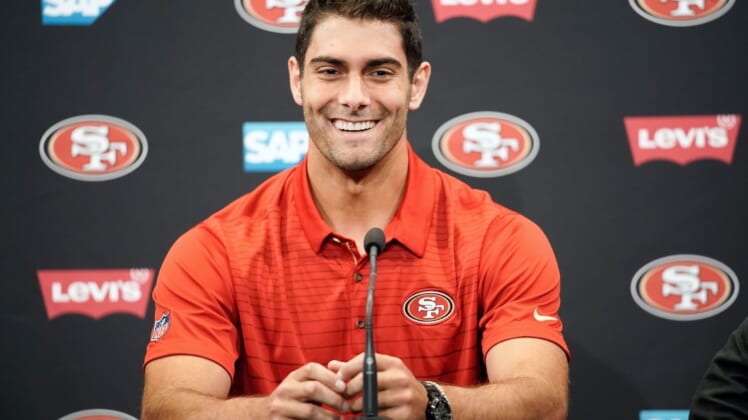 The San Francisco 49ers are feeling pretty good about the deal they made with the New England Patriots to acquire quarterback Jimmy Garoppolo.

General manager John Lynch, in a radio appearance with KNBR Friday morning, made it clear the 49ers see Garoppolo as a franchise quarterback. He said, “That’s only been emphasized by the week that he’s been here,” per Matt Barrows of the Sacramento Bee.

These days it typically takes more than a single draft pick to land a franchise quarterback in a trade. And it certainly takes more than a second-round pick, which is what the 49ers gave up in exchange for Garoppolo. So it’s not surprising that Lynch is excited about what he’s seen from Garoppolo the past week-plus.

Even though the former Pats backup has been with the 49ers for a very short period of time, the team is leaving the door open for him to potentially start in Week 10 against the New York Giants. At this point, San Francisco has nothing to lose, record-wise, as it is still without a win. However, given the team’s issues at offensive line maybe now’s not the time to throw your future franchise quarterback to the wolves.

Then there’s the matter of a contract. Jimmy Garoppolo will be a free agent after this year, so it’s going to be interesting to see how that dynamic plays into how he’s handled the rest of the way in 2017.