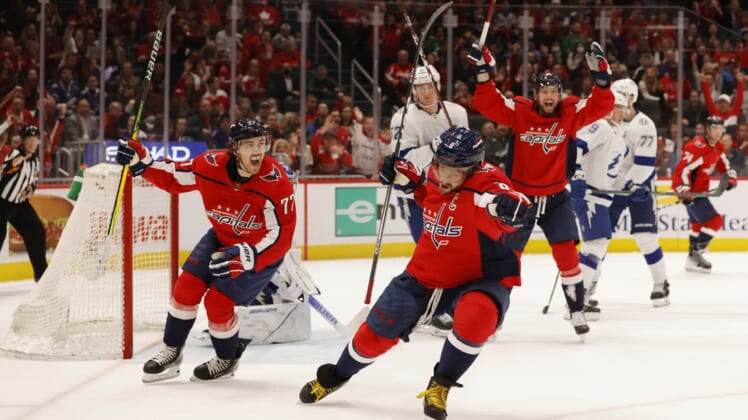 Defenseman John Carlson had two power-play goals and two assists as the Washington Capitals salvaged a game in the season series by defeating the visiting Tampa Bay Lightning 4-3 on Wednesday.

Alex Ovechkin eclipsed the 1,400-point milestone with a goal and an assist, Martin Fehervary tallied and Evgeny Kuznetsov had two assists for the Capitals (38-22-10, 86 points), who finished the season 1-1-1 against Tampa Bay.

Tampa Bay fell to 0-2-1 in the past three games while Washington snapped a two-game skid.

In the opening period, Carlson played a major role in all three Washington scores and nearly netted a fourth.

He dished a pass to Fehervary on an odd-man rush, and the defenseman beat Vasilevskiy on the stick side at 5:10 for his sixth tally. Then on the Capitals’ first power play, Carlson one-timed a shot from the point for a 2-0 lead.

On a wild play after Samsonov’s stick was knocked out of his hand, Kucherov scored for the third consecutive game by beating the stickless netminder at 8:41 for his 14th goal.

Ovechkin put the Capitals up 3-1 when his attempted pass hit Colton’s skate and bounced back to the Washington sniper. Ovechkin then batted in his 43rd goal of the season — his 773rd overall — at 15:10 as Carlson notched another assist.

Paul answered with his 13th goal of the season and second with the Lightning just 81 seconds later.

Carlson appeared to find the net again near end of the high-scoring frame, but a video review overturned the goal after the Lightning’s challenge, leaving the score 3-2.

However, Carlson did zip in his 13th in the second with a similar shot as his first, at 16:35 with traffic in front on a power play.

In the third period, Colton’s power-play goal with 2:50 left made it a one-goal game, but Vasilevskiy drew a tripping penalty on Tom Wilson’s breakaway with 1:52 to go.

T.J. Oshie’s hooking penalty with 13.3 seconds erased Washington’s man advantage. However, the visitors couldn’t get off a good shot in the closing moments.