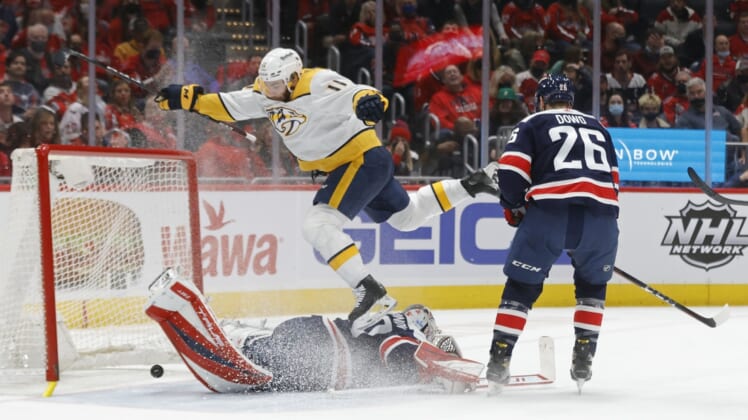 John Carlson had a goal and three assists, and Evgeny Kuznetsov scored a short-handed goal to give the Washington Capitals a 5-3 win over the visiting Nashville Predators on Wednesday.

With the game tied 3-3 at 14:24 of the third period, Kuznetsov took the puck from behind Nashville’s net and quickly fired a shot through traffic that beat goaltender Juuse Saros.

Carlson recorded the first four-point game of his NHL career. The 13-year veteran had previously hit the three-point plateau on 12 different occasions.

Carl Hagelin had an assist and an empty-net goal for Washington, while Dmitry Orlov had two assists. Lars Eller and Nic Dowd scored the Capitals’ other two goals.

Due to the NHL’s COVID-19 shutdown, both the Predators (12 days) and Capitals (10 days) were returning to the ice after long layoffs. Nashville showed plenty of rust in the early going, and the Capitals took advantage by scoring three times during a lopsided first period.

Following that slow start, the Predators raced back to tie the score before the second period was eight minutes old. Trenin deposited a rebound at 1:23 of the second frame, while Kunin (7:03) and Forsberg (7:38) added tallies within a 35-second span.

Forsberg has seven points (three goals, four assists) over the course of a five-game points streak.

Washington was 0-for-6 on the power play, continuing the team’s struggles with the extra attacker. Over their last 10 games, the Capitals have just one goal in 27 power-play chances, but also three short-handed goals.

Ilya Samsonov stopped 17 of 20 shots for his 12th win of the season.

Saros saved 32 of 36 shots, including a robbery of Kuznetsov during a Washington power play.

The Capitals were missing six players on COVID protocols. The Predators had three players in protocols, including team captain Roman Josi.

Washington snapped an eight-game (0-7-1) losing streak against the Predators, defeating Nashville for the first time since March 18, 2016.