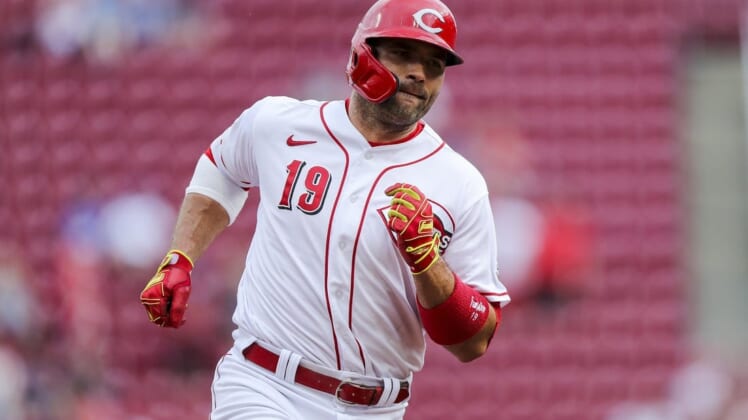 Joey Votto homered, tripled and drove in three runs as the Cincinnati Reds edged the visiting Chicago Cubs 4-3 on Wednesday in the third game of a four-game series.

Reds center fielder Nick Senzel made a pair of outstanding plays in the field, including a leaping grab of a line drive off the bat of pinch hitter Willson Contreras with two runners on in the ninth to preserve the lead.

Votto continued his mastery of Cubs starter Kyle Hendricks (2-5). The Chicago right-hander has now allowed five homers to Votto, the most he’s yielded to any major league hitter.

With a homer and triple in his two plate appearances, Votto is now batting .395 (15-for-38) against Hendricks.

Votto was involved in some tense moments in the eighth inning when Cubs reliever Rowan Wick threw a fastball high and tight to the slugger ahead of an eventual walked. As Votto made his way to first base, Wick had words for Votto, who continued the heated exchange with Wick and the dugout from first base.

An angry Cubs manager David Ross was ejected for arguing with umpires when Patrick Wisdom was hit by Reds reliever Hunter Strickland with a fastball on the left arm with one out in the ninth.

The Cubs, who won the first two games of the series, jumped out to a first-inning lead. Ian Happ to left against Luis Castillo (1-2) with one out, scoring Christopher Morel and Seiya Suzuki.

The Reds began their comeback in the second when Votto drilled his second homer of the season to the seats in right.

Votto capped Cincinnati’s three-run rally in the third when he tripled home Brandon Drury and Tommy Pham. The go-ahead hit came moments after Pham tied the game with an RBI single to right.

Castillo was pulled after five innings and 94 pitches, having allowed two runs and four hits. He struck out six and walked one.

Hendricks was pulled after four innings. He gave up four runs on five hits with one walk and one strikeout.

Tony Santillan, Alexis Diaz and Art Warren threw a scoreless inning each for Cincinnati before Strickland allowed one run in the ninth on a two-out, pinch-hit single from Nico Hoerner.

Strickland recorded his first save with the Reds and his first overall since 2019 by striking out Morel with runners on the corners for the last out.