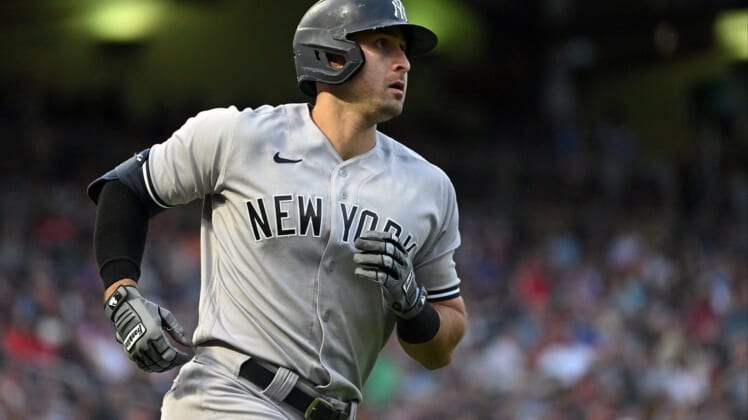 Joey Gallo hit two home runs and DJ LeMahieu and Aaron Hicks also homered as the New York Yankees rallied from an early four-run deficit to defeat the Minnesota Twins 10-7 in the rubber game of their three-game series on Thursday night in Minneapolis.

Gallo, LeMahieu, Hicks, Anthony Rizzo, Josh Donaldson and Gleyber Torres each had two hits. Gallo and Hicks had three RBIs for the Yankees, who finished with 14 hits while winning their 14th series of the season.

Luis Arraez, Carlos Correa and Trevor Larnach also homered for the Twins — all off New York starter Gerrit Cole, who became the first Yankee pitcher to allow five home runs in a road game since Ron Guidry on Sept. 17, 1985, at Detroit. Cole became the seventh Yankee to ever give up that many.

Cole entered the game with a 2.78 ERA and had allowed just six home runs all season. He left after allowing seven runs on eight hits and two walks over 2 1/3 innings; he saw his ERA balloon to 3.63.

Miguel Castro (3-0) picked up the win and Clay Holmes notched his ninth save with a 1-2-3 ninth.

New York took a 1-0 lead in the first when Aaron Judge walked, advanced to third on a single by Rizzo and scored on a sacrifice fly by Donaldson.

Minnesota then took a 3-1 lead on home runs by Arraez, Buxton and Correa. The three homers came over a span of just four pitches.

The Yankees tied it in the second on a two-run homer by Gallo, but Buxton answered with a three-run homer in the bottom half of the inning — his 15th homer of the season.

Larnach made it 7-3 in the third with his fifth homer of the season, a 441-foot drive deep into the second deck in right-center.

But New York came back to score in four straight innings to win it. Gallo and LeMahieu hit back-to-back homers in the fifth to cut Minnesota’s lead to 7-5, and Hicks tied it with a two-run blast in the sixth, off reliever Joe Smith.

Rizzo made it 10-7 in the eighth when he scored on a two-out, bases-loaded wild pitch to Hicks by Jovani Moran.