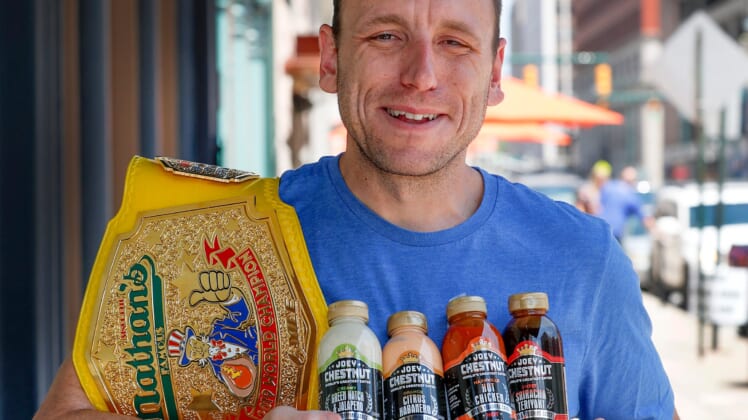 Much like he’s been every year for the past decade, Joey Chestnut is an absolute legend on this 4th of July. An American legend.

The all-time great competitive food eater was back in Coney Island for yet another Nathan’s Hot Dog Eating Contest on Monday. The caveat? Mr. Chestnut was playing injured. You could see him enter the “playing stage” sporting two crutches. Talk about a gamer.

The hobbled legend. Overcoming injury to perform on the game’s grandest of stages. Pulling his own Willis Reed or Paul Pierce. And in absolutely stunning fashion, Joey Chestnut did lot let the injury impact his performance. He came away with the win by eating 63 hot dogs.

This represents the Kentucky native’s 15th career win in the grand slam of all eating contests. The scene was surreal.

In even more stunning fashion, a protestor made his way up to the stage holding an “expose Smithfield’s death star sign.” We’re not even going to pretend to know what that means. But Chestnut took things into his own hands (almost literally).

Social media reacts to another legendary performance from Joey Chestnut