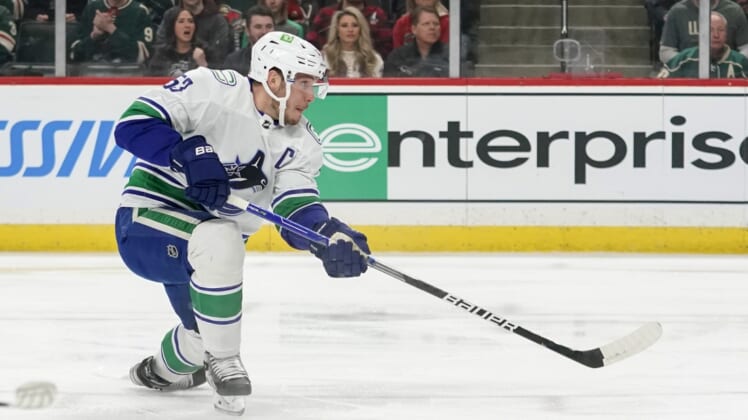 Joel Eriksson Ek scored 31 seconds into overtime, sending the Minnesota Wild to a 3-2 win over the visiting Vancouver Canucks for their fourth consecutive victory Thursday night in St. Paul.

Down 2-1, Vancouver tied the game 7:56 into the third period. Just six seconds into a power play and off a faceoff in the Minnesota zone, J.T. Miller circled the puck and blew a wrister by Wild netminder Cam Talbot to level the contest and eventually force overtime.

However, moments after Miller hit the post with his shot in the extra session, Eriksson Ek converted. He took a stretch pass from Kirill Kaprizov, broke in, faked a backhand, then went forehand to beat Vancouver’s Thatcher Demko (33 saves) to improve the Wild to 6-1-1 after losing eight of 10.

Kaprizov also scored his 33rd goal of the season, Kevin Fiala added his 21st and Talbot made 26 saves to match a career high by winning his seventh consecutive start.

Bo Horvat scored in a third consecutive game for the Canucks, who are trying to move into playoff position in the Western Conference, but couldn’t completely build on Wednesday night’s impressive 3-1 victory at Colorado. Vancouver coach Bruce Boudreau was facing the Wild for the first time since they fired him on Feb. 14, 2020, after three-plus seasons behind their bench.

Vancouver recorded the first four shots on goal, and opened the scoring just 4:13 into the contest. After the puck jetted quickly off the back boards and into the slot, wide-open Horvat drove it by Talbot for his eighth goal in nine games.

However, Minnesota made its first shot on goal count. The Canucks were unable to clear their zone, and Kaprizov made them pay by ringing the post with just under 12 minutes to go in the opening period.

The Wild went ahead 2-1 only 1:44 into the second. Off a faceoff, the puck slid into the slot were Fiala beat a rather unprepared Demko, who was also blocked by some net-front traffic.