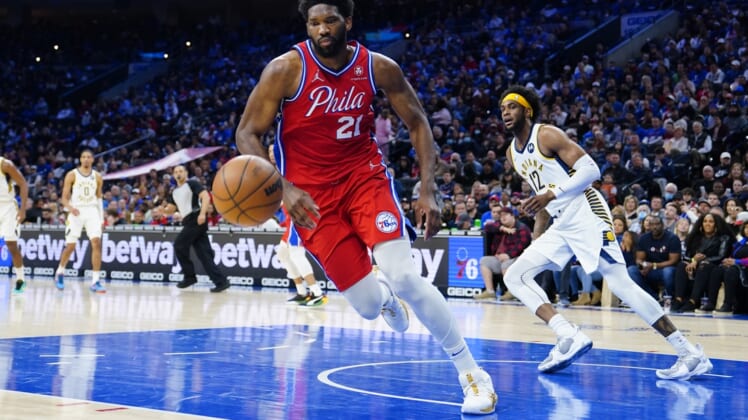 Joel Embiid added to his MVP argument on Saturday afternoon with 41 points on 14-of-17 shooting and a season-high 20 rebounds, leading the Philadelphia 76ers to a 133-120 win over the visiting Indiana Pacers.

Embiid started hot out of the gate, scoring Philadelphia’s first six points of the game. He went into halftime with a double-double and finished with his third career 40/20 game, his first since Aug. 1, 2020 — also against Indiana. He added four assists, two steals and a blocked shot.

Philadelphia (50-31) got 22 points and 14 assists from James Harden, while Tobias Harris and Tyrese Maxey each scored 18 points. Danny Green added 15 points and made four 3-pointers.

Despite trailing for all but a brief moment in the first quarter, Indiana (25-56) fought throughout.

Indiana trailed by as many as 21 points before trimming the deficit to 106-98 in the fourth quarter.

However, a sequence in which Embiid scored on a floater and 3-pointer — both set up by Harden assists — and Green converting a four-point play after being fouled on a successful 3-point attempt, pushed the Philadelphia lead back to 115-100 points in less than a minute.

The Sixers cruised from there to secure a 50-win season and maintain the hope of climbing out of the No. 4 spot in the Eastern Conference. Philadelphia shares the same record as Boston and is one game behind Milwaukee (51-30) for the No. 2 seed.

All three teams will close out the regular season on Sunday, with Philadelphia hosting Detroit, the Celtics visiting Memphis, and the Bucks playing at Cleveland.