Philadelphia 76ers superstar Joel Embiid seems to think Toronto Raptors head coach Nick Nurse needs to save his breath, and time, when it comes to complaining about how the referees are calling fouls against him in the team’s first-round Eastern Conference NBA playoffs matchup.

On Monday, Embiid lit the Raptors up for 31 points, 11, rebounds, and 12 of 14 makes at the free-throw line in a 112-97 victory as the 76ers took a dominant 2-0 lead in the series. The victory comes on the heels of a 131-111 win by Philly where Nurse complained that several of his players were on the wrong end of elbows to the face from the center that went uncalled.

On Monday, it seems that Embiid looked to make a statement, demanded the ball early, and went to work in the paint. The favorite to win the NBA MVP award in 2022 dropped 19 of his game-high 31 — 12 at the free-throw line — in the first quarter as he helped to halt a hot start by the Raptors.

Late in the game, when the victory was all but secured, the five-time All-Star and Nurse had a sideline exchange that got the attention of fans and media. Of course, the 28-year-old was asked about the conversation after the game, to which Embiid explained that he was letting the Raptors ball coach know he was wasting his time in trying to sway the refs to more strictly call his play in the low post.

“He’s a great coach. Obviously, he’s been able to accomplish [a lot], and [I’ve] always been a big fan. But, I told him, respectfully, I told him to stop b***hing about calls,” Embiid said.

The 12 free throws in the opening quarter was a staggering number, however, Embiid felt it was justified as Toronto double and triple-teamed him to try and slow down his early game rampage. In his mind, when you put that many bodies together there is bound to be a bunch of whistles. 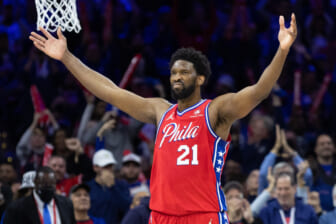 When asked about how the action was called in Game 2, Nurse had some fun and tried to find positives in a second straight loss. “At least there weren’t as many elbows thrown to the face tonight that we had to endure,” Nurse joked.

Game 3 of the 76ers versus the Raptors are on the NBA games today listing for Wednesday.