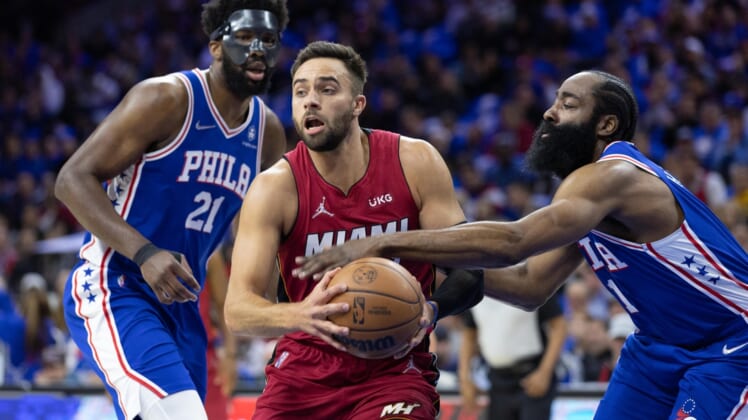 Joel Embiid had 18 points and a game-high 11 rebounds in a triumphant return from injury as the host Philadelphia 76ers defeated the Miami Heat 99-79 in Game 3 of the Eastern Conference semifinals on Friday night.

Embiid returned after missing two straight games due to a concussion and a facial fracture. The Sixers are 6-10 without Embiid across the regular season and playoffs and 50-25 with him.

Tyrese Maxey had all 21 of his points in the second half for the Sixers, and Danny Green, who entered the game in a shooting slump, made 7 of 9 3-pointers to finish with 21 points. He had gone just 2 for 14 from distance in the first two games of the series.

Jimmy Butler led the Heat with a game-high 33 points and nine rebounds.

The Sixers also got 17 points from James Harden, including 15 in the first half. Tobias Harris had a near triple-double with nine points, 10 rebounds and eight assists.

Heat point guard Kyle Lowry, who returned after missing four straight games due to a hamstring injury, had no points and three assists in 25 minutes. Besides Butler, Miami’s only other double-figure scorer was Tyler Herro (14 points).

In the first period, both teams shot below 36 percent from the floor, and Philadelphia led 21-17.

The Sixers started the third quarter on a 7-0 run, but Miami went on to pull together a 13-0 stretch and ultimately tie the score at 57. Maxey then hit a 3-pointer, got a steal and converted a layup before the Sixers ended the third on top, 68-65.

The Sixers never lost their lead in the fourth quarter, prevailing despite turning the ball over 19 times in the game — seven more than Miami.

The Sixers were plus-nine on rebounds and plus-13 on fast-break points.