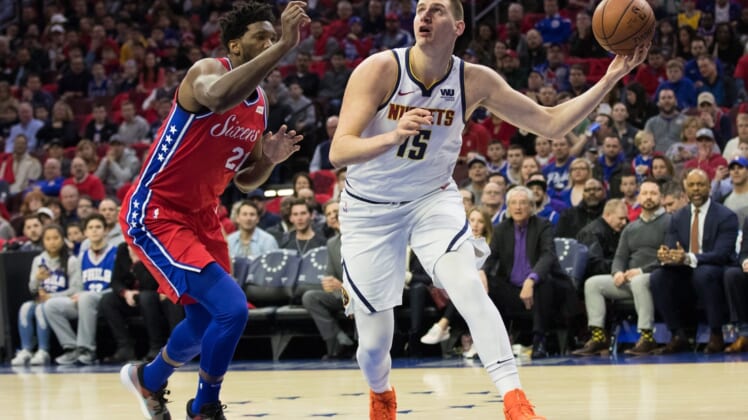 The Philadelphia 76ers will look for their second victory in two nights when they host the Denver Nuggets on Monday.

The Sixers squeaked past the host Orlando Magic 116-114 in overtime Sunday night.

“The moral was we stuck with it, kept fighting and came away with the victory,” Harris said in a postgame interview with NBC Sports Philadelphia.

Following a rough defensive performance against the Brooklyn Nets on Thursday, the Sixers scuffled against the undermanned Magic.

While he has been terrific for the most part offensively, the past two games have shown how much he needs to improve when it comes to shutting down players.

When the Sixers last played in a back-to-back situation, they opted to rest Harden and ultimately lost to the Miami Heat on March 5. It’s unclear whether any of the Philadelphia standouts will receive the night off against the Nuggets.

The Nuggets will hope to avoid a third straight loss when they visit Philadelphia.

After losing 113-102 to the Golden State Warriors on Thursday, the Nuggets fell 127-115 to the Toronto Raptors on Saturday.

Nikola Jokic led the way with 26 points and 10 rebounds, Bones Hyland scored 17, and Will Barton had 16. Barton returned from a three-game absence due to ankle soreness.

But the Nuggets were outrebounded 55-46, including team boards.

“That’s unacceptable,” Jokic said of the rebounding disparity. “They had more offensive than defensive, it seemed like. We just need to do a better job.”

There will be plenty of motivation for the Nuggets, especially Jokic’s personal matchup against Embiid. Jokic won the Most Valuable Player award last season, and Embiid looks to be the front-runner this season.

“He’s a great player, great,” Jokic said of Embiid. “Like, for real, great, great player. He can do everything on the floor, who is controlling the game, who is in conversation for MVP and the best player in the league. He’s so dominant. He’s skilled, but he’s so big and strong that he uses that. He’s really tough coverage for every single team in the NBA. I like to play with the best in the league and the best in the business.”