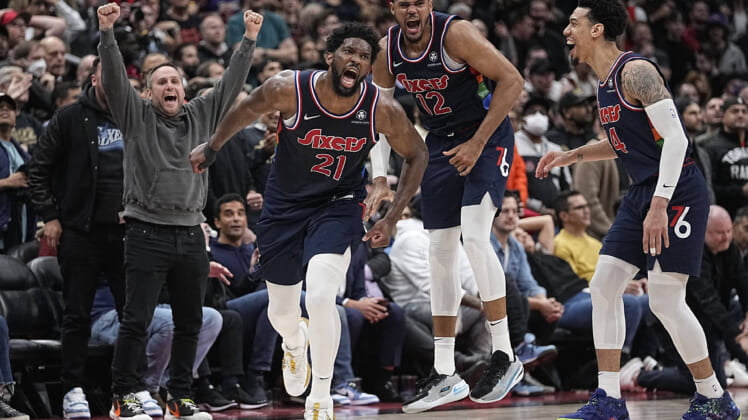 Joel Embiid and the Philadelphia 76ers were involved in a battle in Game 3 of their first-round NBA Playoff series against the Raptors in Toronto Wednesday evening.

Toronto needed the win in order to avoid falling down 3-0 in the series. It held the lead for pretty much the entire game before Embiid and the Sixers outscored the home team 28-19 in the third quarter.

With the game tight throughout the final stanza, an Embiid missed three-pointer at the end of the fourth quarter forced overtime.

As the two team’s struggled to score in overtime with 76ers star James Harden having fouled out late in the fourth, Embiid put up a career-defining moment.

Let’s set the scene inside Scotiabank Arena in Toronto. With the game tied at 101 and under three seconds remaining in overtime, Joel Embiid found himself on the receiving end of great defense on the part of Raptors forward Precious Achiuwa.

The NBA MVP finalist was forced to hoist up a three with 0.9 seconds remaining on the shot clock. That’s when 76ers head coach Doc Rivers alertly called a timeout to bail his star center out. That’s also when Embiid pulled up from distance following the timeout to hit the game-winner and pretty much send Toronto packing for the spring. It was an absolutely insane scene.

A 37% three-point shooter during the regular season, it’s not a surprise that Embiid was able to pull up from beyond the arc and nail a three. Rather, it’s all about the moment that’s shocking here. Talk about being absolutely clutch.

For the most part, Toronto has played exceptional defense against Embiid through three games. They also played that final moment to perfection. It’s all about Embiid being able to pull up and send the 76ers to a commanding 3-0 series lead as the team prepares for a likely conference semifinals matchup against the Miami Heat following Wednesday’s 104-101 win.