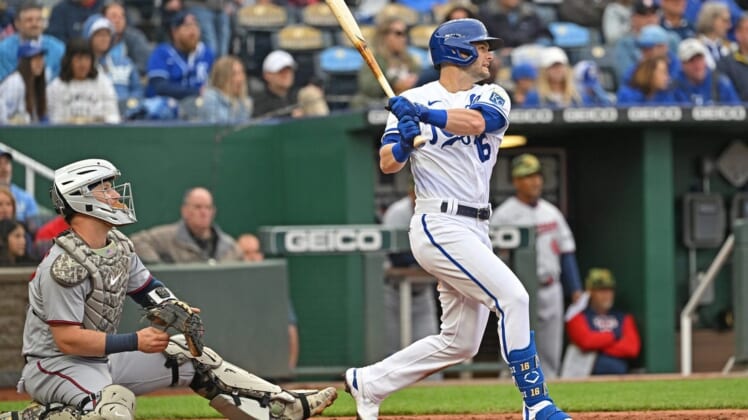 The Royals issued three leadoff walks and all three scored.

The Twins have won the first two games of the three-game series.

Brad Keller (1-4) took the loss. He allowed four runs on five hits in seven innings. He issued three walks and struck out four.

The Twins scored their first two runs in the third inning. Gio Urshela led off with a walk. He moved to second on a bloop hit to center by Ryan Jeffers. The runners were bunted to second and third. Byron Buxton’s sacrifice fly drove in Urshela and a two-out single by Arraez scored Jeffers.

The Royals answered with one in the bottom of the inning. Whit Merrifield pulled a one-out double into the left-field corner. When Andrew Benintendi followed with a single, Merrifield scored the Royals’ first run — and their first run of the season against Ryan, who had pitched six scoreless innings in his first start against the Royals April 21.

Arraez led off the sixth with a walk and scored on a two-out single by Max Kepler, who then scored on a double by Gary Sanchez for a 4-1 lead.

The Royals loaded the bases in the sixth off Ryan, but Caleb Thielbar got Kyle Isbel to fly out to end the inning.

Thielbar began the seventh by giving up a solo home run to Emmanuel Rivera to trim the lead to 4-2.

But Arraez led off the eighth with another walk and scored the Twins’ fifth run on a wild pitch. The Twins then scored four more runs in the ninth.