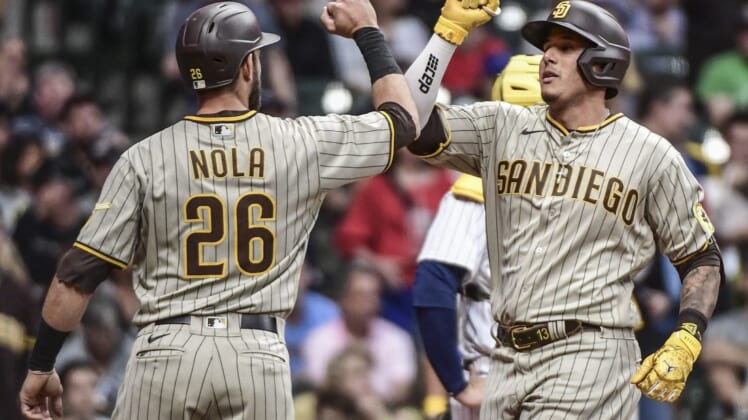 Joe Musgrove took a no-hitter into the eighth inning to win a battle of pitching aces and Manny Machado belted a three-run homer as visiting San Diego snapped a four-game losing streak with a 7-0 victory over the Milwaukee Brewers on Friday night.

Musgrove, who last season tossed the only no-hitter in Padres history, did not allow a hit until Kolten Wong’s two-out double in the eighth. He got the final out in the eighth before giving way to Craig Stammen.

Musgrove (6-0) walked three and hit one batter with six strikeouts in his 114-pitch outing, lowering his ERA to 1.64. Musgrove recorded his no-hitter in a 3-0 victory over the Texas Rangers on April 9, 2021.

Machado’s ninth homer put San Diego in front 5-0 in the fourth. Austin Nola walked with one out and Jurickson Profar singled. After Jake Cronenworth struck out, Machado sent a 2-2 pitch 370 feet to left.

Eric Hosmer then reached on an error and Luke Voit lined a single off the glove of shortstop Pablo Reyes, ending the 95-pitch outing for Burnes, whose ERA jumped from 1.95 to 2.50.

San Diego added a run in the fifth and another in the ninth.

The Padres got to Burnes for single runs in the first and second, but also stranded three runners in scoring position.

Burnes retired the first two hitters, but then walked Machado. Hosmer singled and Voit followed with a ground-rule RBI double. Burnes got Nomar Mazara on a ground out to leave runners at second and third.

In the second, Trent Grisham doubled with one out and scored on Profar’s two-out single to right. Cronenworth followed with another single, but Burnes got another inning-ending ground out.

Milwaukee’s injury woes continued to mount with shortstop Luis Urias coming out after three innings with right thumb discomfort. Urias moved from third to short when Willy Adames went on the IL in mid-May.