Joe Montana has a hot take on Trey Lance, says he shouldn’t play yet

Jimmy Garoppolo or Trey Lance? Count one for Jimmy G.

As one of the all-time San Francisco 49ers greats, Joe Montana isn’t afraid to offer his opinion on where the franchise should turn next at quarterback.

The 49ers are widely expected to move on from Garoppolo this offseason via trade. This was the plan from the start of the year after Lance, the No. 3 overall pick from North Dakota St. didn’t do enough to show he’s better than Jimmy G during training camp.

Then, Garoppolo proceeded to have one of his best, most complete seasons yet, leading the 49ers back to the NFC Championship game behind several gutsy performances with the game on the line.

His effort, along with how his team rallied behind him, speaking to his abilities as a leader on and off the field, and some have begun to wonder if the 49ers actually will move on from Garoppolo. Not to mention, his coach, Kyle Shanahan, and his general manager John Lynch remain large fans of the QB as well.

Although his opinion likely holds zero weight with the people making the decisions, Hall of Fame QB Joe Montana thinks Garoppolo should stick around in the Bay Area since he’s actually shown the ability to bring his team to the Super Bowl.

“I think you keep Jimmy until you find somebody else,” Montana said. “I don’t think Trey’s ready to play yet, myself, and after talking to some of the players. It’s one of those things that, if you can keep Jimmy healthy, he plays well enough to get you here.”

The 49ers are walking the tightrope here. Jimmy Garoppolo just made a hell of a case to stick around as the team’s starting quarterback for the foreseeable future. Who moves on from your starting quarterback after he brought you within four points of victory in the NFC Championship game?

At the same time, Garoppolo had his less-than-perfect moments as well, such as during the final frame of the game when 49ers fans won’t forget an ugly game-sealing interception.

But who’s to say Trey Lance, who failed to gain the trust of his head coach as a rookie will suddenly be ready to surpass Jimmy G’s efforts in 2022? That’s no guarantee either. Lance may offer more as a read-option dual-threat quarterback, but is he ready to read NFL defenses? Can he effectively spread the ball around to his playmakers? Are we sure he can be any more durable than Garoppolo was?

These are all major questions that Lance will have to answer. There’s no doubting his potential, but how quickly can he reach it? Going with Lance adds a lot of pressure onto the shoulders of Shanahan, whereas right now the pressure is still on Jimmy G. We’ll see which direction the franchise chooses this offseason. 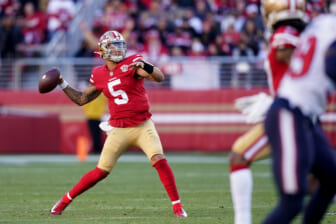