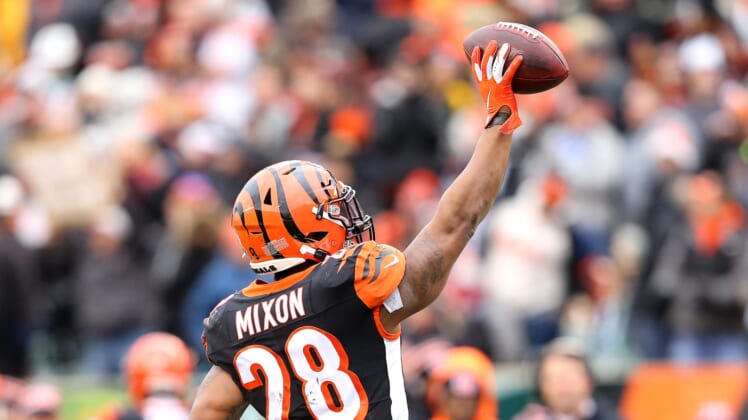 The Cincinnati Bengals took the first step to revitalizing their offense this offseason by drafting Joe Burrow. With star running back Joe Mixon’s new contract extension, this offense is set to explode in the 2020 NFL season.

Mixon, who was sidelined in training camp by migraines with less than two weeks before the season opener, cashed in on Tuesday with a huge four-year contract extension.

A second-round pick in the 2017 NFL Draft, Mixon has been productive in his first three seasons. Across 35 games, he has compiled 2,931 rushing yards, 870 receiving yards and 21 total touchdowns. However, his potential has often been capped by Cincinnati’s offense.

However, the Bengals recognize that he is an extraordinary talent. As a result, per NFL Network’s Ian Rapoport, Mixon is landing a four-year extension worth $48 million. The new deal will carry significant money up front and keep him under contract for five seasons.

While specifics of the contract haven’t been disclosed, $48 million over four seasons would make Mixon the sixth-highest paid running back in the NFL. The deal comes just under the massive four-year contract Derrick Henry signed in July.

Mixon hasn’t been named an NFL All-Pro or even voted into the Pro Bowl in his first three years. However, that’s likely about to change in an offense that will surprise a lot of people this season.

Cincinnati’s receiving corps will be one of NFL’s best

A great passing attack can be critical to things opening up for the running game. Opposing defenses will be forced to respect Cincinnati’s passing attack this season, which will create all kinds of opportunities for Mixon.

All told, we’re expecting big things from Mixon this season. He is capable of hitting 2,000 scrimmage yards if he stays healthy and is a featured piece of Cincinnati’s offense. Combine that with this passing game and you’ve got an offense that will be exciting to watch this NFL season.