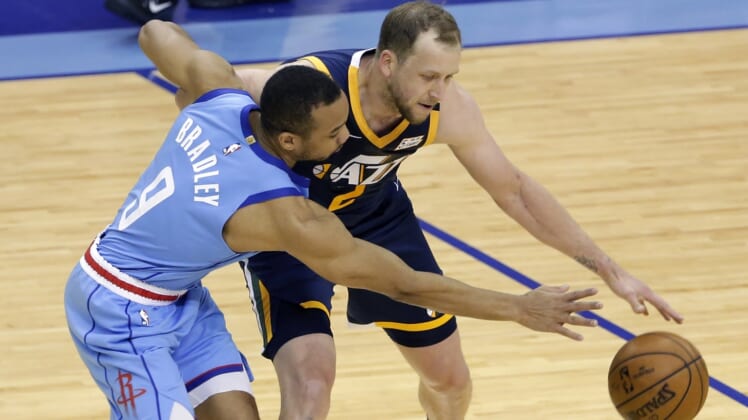 Joe Ingles and Jordan Clarkson combined for 10 3-pointers as the Utah Jazz overwhelmed the Houston Rockets from the perimeter in their 112-89 road victory on Wednesday.

Ingles finished 6 for 10 from behind the arc for 21 points while Clarkson scored 22 points off the bench on 4-for-9 3-point shooting as the Jazz, first in the NBA in 3-pointers made and attempted per game, went 17 for 46 from deep. Utah outpaced the Rockets in every conceivable manner but the 3-point shooting resonated as Houston shot 10 for 49 on 3s.

Bojan Bogdanovic scored 14 points and hit three 3s while Georges Niang chipped in 13 points and three 3s off the bench. Niang was instrumental in the run that bridged the first and second periods that enabled the Jazz to reclaim control after Houston closed to 28-27 on a John Wall three-point play. Niang and Clarkson hit 3s to close the frame, part of a 14-0 run to a 42-27 lead.

When the Rockets fashioned a 9-0 run to cut what once was a 17-point deficit to 49-41 late in the second quarter, the Jazz capped the first half with a 12-2 spurt that featured 10 combined points from Ingles and Bogdanovic, both of whom drilled 3-pointers during the surge.

Utah led 61-43 at the intermission as Ingles, Niang and Clarkson shot a combined 9 for 16 from deep. The Jazz hit 11 of 25 3-pointers prior to the break before opening the second half with a 19-5 blitz that put the game out of reach. Royce O’Neale and Ingles converted turnovers from Christian Wood and Wall into a dunk and 3-pointer, respectively, and when Clarkson sank two free throws at the 5:39 mark of the third quarter, the Jazz led 80-48. Utah led by as many as 36.

Rudy Gobert wasn’t part of the 3-point barrage for Utah but finished with 19 points, 18 rebounds and two blocked shots. Wall led the Rockets with 21 points and six assists while Wood chipped in 16 points and eight boards.