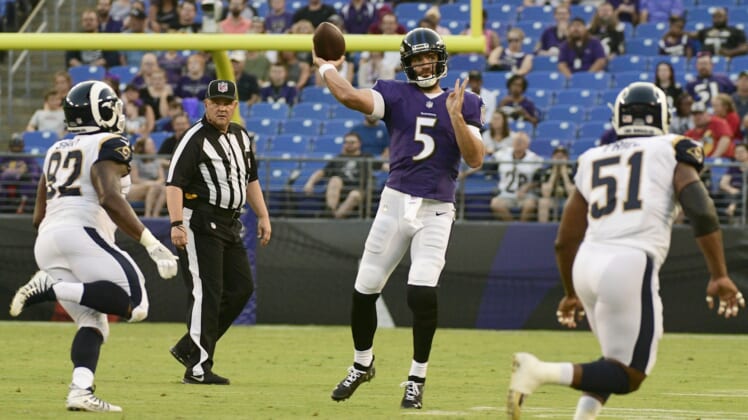 Baltimore Ravens quarterback Joe Flacco seemed rather disinterested in lining up at wide receiver for one play in last week’s loss to the Cleveland Browns.

With rookie Lamar Jackson taking the snap under center, Flacco could be seen standing around on the outside. He didn’t run a route. He failed to attempt a block. He just stood there.

Now, it seems that Flacco’s wife is none too happy with his effort.

“My wife gave me crap the one day, told me I need to look more interested out there,” Flacco said Wednesday, via ESPN. “But I’m just trying to stay out of it. I’m not comfortable out there. I don’t need to get too creative.”

Talk about being a perfectionist.

It’s also probably a good thing that Flacco didn’t decide to throw his weight around out there. In today’s NFL, it would have likely led to a suspension for any Browns player that decided to give him a little love tap.

Though, Flacco himself has apparently matured in recent years. Back in 2013, he called the Ravens’ wildcat formation with then-backup Tyrod Taylor a “high school offense.”

Our only recommendation here for Flacco is not to piss his wife off. Try some fake effort next time, Mr. Super Bowl winner.