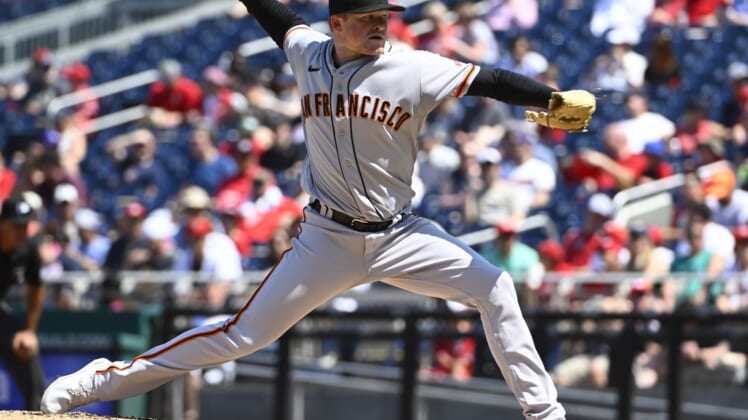 Joc Pederson went 3-for-3 with two homers and three RBIs as the visiting San Francisco Giants completed a three-game sweep of the Washington Nationals with a 12-3 victory on Sunday.

Wilmer Flores had three hits and drove in three runs for San Francisco, which broke the game open with six runs in the ninth inning and improved to 7-3 on its 11-game road trip.

Logan Webb (2-1) allowed three runs on seven hits over 6 2/3 innings. He walked one and struck out six.

Yadiel Hernandez homered and drove in three runs for Washington, which lost its fifth straight and scored a total of six runs in the series.

Pederson greeted Nationals starter Joan Adon (1-3) with a leadoff homer to begin the game, a 441-foot blast to right field.

The Giants added another run in the inning when Brandon Crawford doubled with two outs and scored on Flores’ single.

Washington answered with a run in the bottom of the first on Hernandez’s run-scoring single with two outs.

After Webb retired the first two batters in the third, Keibert Ruiz doubled and Hernandez homered to left field. The home run was the first allowed by Webb in 59 1/3 innings.

Adon yielded five runs on six hits over four innings. He walked one and struck out three.

The Giants moved ahead 5-3 on Flores’ run-scoring single in the fifth and added to their lead on Peterson’s leadoff homer in the seventh off Austin Voth.

The Giants pulled away with a big ninth inning, when they sent 12 batters to the plate and scored six runs. Luis Gonzalez and Austin Slater each drove in two runs during the rally.

Juan Soto went 0-for-4 and has four hits in his last 27 at-bats for Washington, which used seven relievers and only had three baserunners after Hernandez’s fifth-inning homer.