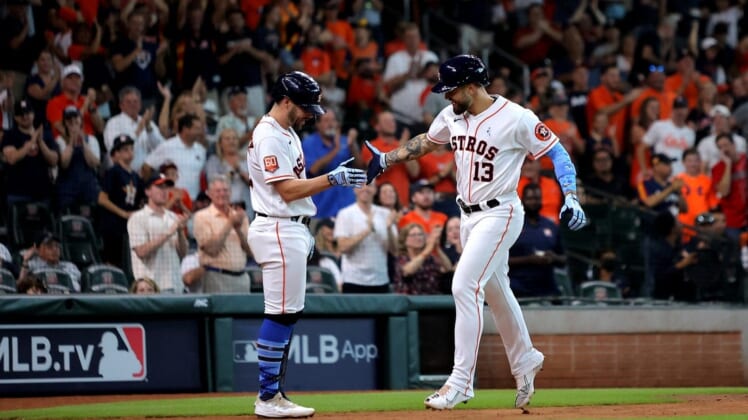 JJ Matijevic hit his first career homer with two outs in the fourth inning, Mauricio Dubon added a two-run homer in the fifth and the host Houston Astros recorded a 4-3 victory over the Chicago White Sox on Sunday night.

Matijevic homered in his sixth career game and was 0-for-8 in his career until he lifted a first-pitch 94 mph fastball from Chicago starter Michael Kopech (2-3) into the Crawford Boxes in left field. The ball was caught by 16-year-old fan Rylan Freeman and he exchanged the ball for six tickets to an upcoming game with batting practice access along with a signed baseball by Jose Altuve and a signed jersey by Justin Verlander.

Dubon connected two batters into the fifth when he lifted a full-count fastball from Kopech into the left field seats.

Kyle Tucker added an RBI single for the Astros, who won for the fifth time in seven games following a three-game losing streak June 8-11.

Luis Robert hit an RBI double, AJ Pollock hit an RBI triple and Jake Burger had a run-scoring groundout for the White Sox, who were unable to get their first series win in Houston since July 2016.

Houston’s Cristian Javier (4-3) allowed one run and two hits in five innings. He struck out five and tied a season high by issuing four walks.

Ryan Pressly allowed a leadoff walk to Josh Harrison in the ninth before quickly converting his 13th save in 15 opportunities.

Kopech allowed four runs and seven hits in five innings. He struck out four, walked one and averaged 93.9 mph on his fastball after leaving his previous start in the first inning Monday against the Texas Rangers with right knee discomfort.

The Astros took a 1-0 lead in the first when Tucker dropped a single to center field to score Altuve. After Matiejevic homered, the White Sox got within 2-1 when Robert doubled past the diving attempt of center fielder Chas McCormick, allowing Danny Mendick to score from first as the ball reached the warning track.