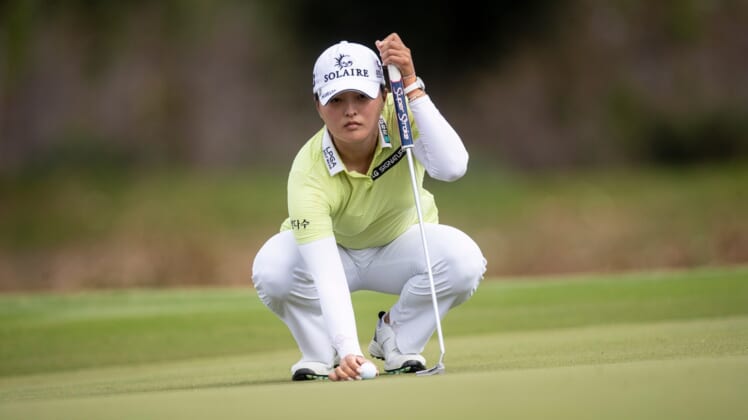 World No. 1 Jin Young Ko fired a 7-under-par 65 to grab the first-round lead at the JTBC Classic at Carlsbad, Calif.

Ko, a 26-year-old from South Korea, is looking for her 14th career LPGA Tour victory. She recorded four birdies on the front nine and three birdies on the back nine and avoided carding a bogey or worse at Aviara Golf Club.

“I have a lot of confidence right now in the course, especially with my caddie,” Ko said. “He helps me a lot so I can get more confidence than without him. So I just want to say thank you to my caddie.

“Yeah, I love to play golf right now, so it’s — I’m really enjoying right now (playing on) the course, playing with whoever. I can focus myself. Shot by shot I can feel confidence, 100 percent, and I can focus 100 percent (on) my ball.”

Nanna Koerstz Madsen of Denmark is one stroke back of Ko after shooting a 6-under-par 66. She carded an eagle on the par-5 eighth hole to go along with five birdies and one bogey.

Next is a three-way tie for third place. Cheyenne Knight of the U.S., Gemma Dryburgh of Scotland and Hye-Jin Choi of South Korea each shot 5-under 67.

“Feeling good,” Knight said. “I feel like my game has been in a good spot for a little bit. It’s just, you know, playing consistently, and I’m just excited to tee it up again.”

Five golfers are three strokes off the lead after shooting 4-under 68. Defending champion Inbee Park of South Korea, a seven-time major winner, opened with a 1-under 71.