Jimmy Garoppolo trade not expected to cost a first-round pick

Most anticipate this to be the final season of Jimmy Garoppolo‘s career with the San Francisco 49ers, with the organization fully expected to go all-in on Trey Lance in 2022. With several teams annually in need of improvement at the quarterback position around the NFL, Jimmy G could become a wanted man, soon enough.

With Garoppolo under contract for the 2022 season and offering a fair amount of trade value, if the 49ers part with him, a team will likely have to trade for the QB with a career 33-14 win-loss record in the regular season.

That’s led to plenty of speculation all season, with fans wondering what a potential Jimmy Garoppolo trade would look like. Since the 49ers already have their QB of the future on the roster, any potential trade is likely to be centered around draft compensation.

Some have pointed to last season’s Carson Wentz trade as a possible example of what a Jimmy G trade could bring back.

In that deal, the Eagles sent Wentz to the Colts, but what they got back was incentive-based, depending on playing-time. The Colts coughed up a 2021 third-round selection and a 2022 first-round pick, that could have been a second-rounder, had Wentz played fewer than 75% of the team’s offensive snaps this past season.

With Garoppolo being a bit tougher to evaluate, with so many differing opinions on him questioning how reflective his win-loss record is of his talent, an incentive-based trade might make the most sense. Whether it’s based on play-time as we saw with Wentz will be left to the decision-makers.

However, Jeremy Fowler of ESPN offers the latest idea on what to expect in a potential trade, and it might be less than some 49ers fans would like to imagine.

Fowler suggests the 49ers may not be able to get a first-round pick back in a Jimmy G trade since he just has one year left on his contract.

Any team looking to part with such a high draft pick would likely want some more long-term assurance that Garoppolo will stick around in his new digs for multiple seasons.

With that said, Garoppolo can directly impact his trade value based on his play for the rest of the playoffs. Jimmy G has been to the Super Bowl in 2019, if he should find a way to return, teams would be quick to line up for the chance to add someone with that pedigree to their starting lineup in 2022. 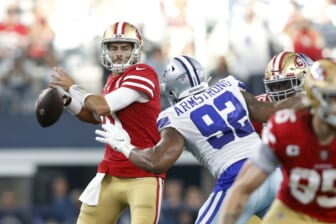