Kyle Shanahan expects Jimmy Garoppolo to be available for OTAs 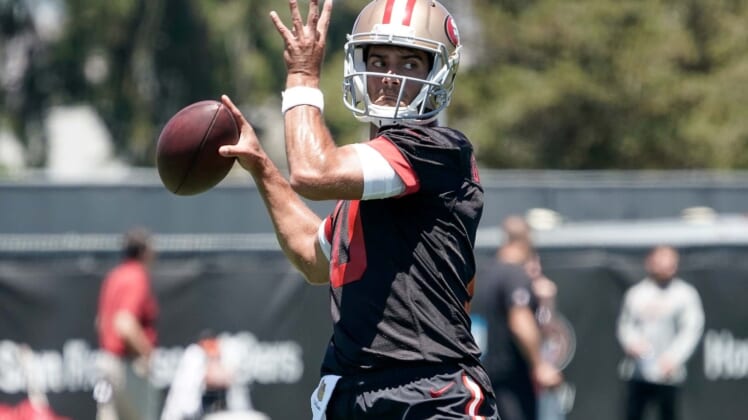 The good news keeps coming for San Francisco 49ers quarterback Jimmy Garoppolo, as head coach Kyle Shanahan expects him to be ready for OTAs in May.

Speaking to SiriusXH NFL Radio while in Mobile, Ala. for the Senior Bowl, Shanahan said “I’m hoping he’s at least ready to at least be throwing stuff by OTAs.”

Shanahan also made it clear he expects the 49ers to make a giant leap in his third year at the helm, saying, “I expect us to be right in the thick of things next year.”

Garoppolo recently looked pretty spry while dancing on stage with Richard Sherman and Nelly during a trip to Las Vegas (watch here).

So it’s not surprising to hear he’s progressing well in his rehab since his ACL was surgically repaired.

The 49ers have a ton of cap space and some outstanding talent on both sides of the ball. They also have the No. 2 overall pick of the draft and could land a huge haul by trading down to acquire even more top-tier talent.

Oh, and Antonio Brown keeps on making it CRYSTAL clear he wants to be wearing Red and Gold.