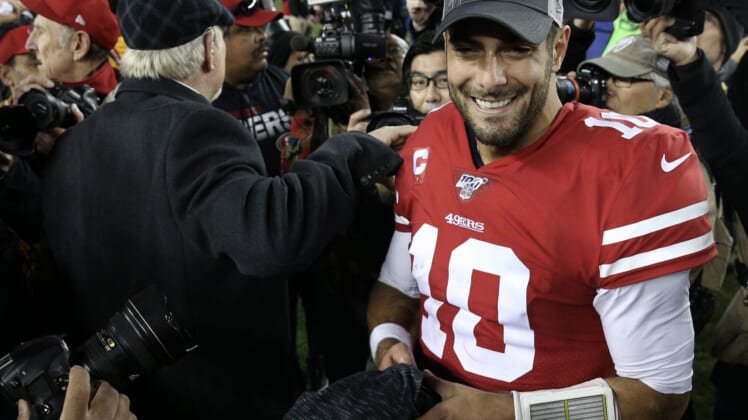 San Francisco 49ers quarterback Jimmy Garoppolo has yet to throw a pass in the Super Bowl. While that will change Feb. 2 against the Kansas City Chiefs, Garoppolo has earned two titles.

He had the ability to watch six-time champion Tom Brady lead his former Patriots team to two Lombardi Trophies during their time together.

In talking about his ex-teammate leading up to Super Bowl LIV, Garoppolo indicated that he plans to use what he learned from Brady in preparing for the biggest game of his life.

”Everyone says it should be like another game, but just the way that he actually did it,” Garoppolo said, via Kerry Crowley of the Bay Area News Group. “Up close and personal, picking up everything I could and seeing how he went about his business, obviously it worked out the two times that I was there with him. I’ll try to transfer that over to my game.”

Garoppolo also said it would be a “good idea” for him to call up Brady for some advice between now and kickoff 10 days from Thursday.

Why not pick the brain of one of the game’s best, a quarterback that has started a record nine Super Bowls?

Coming off an NFC Championship Game performance in which he attempted just eight passes, narratives surrounding Garoppolo have been pretty absurd since Sunday’s blowout win over the Packers.

The good news here is that he not only has Brady to talk to, Garoppolo can hit up former 49ers greats Joe Montana and Steve Young ahead of the big game. He plans on doing just that, too.