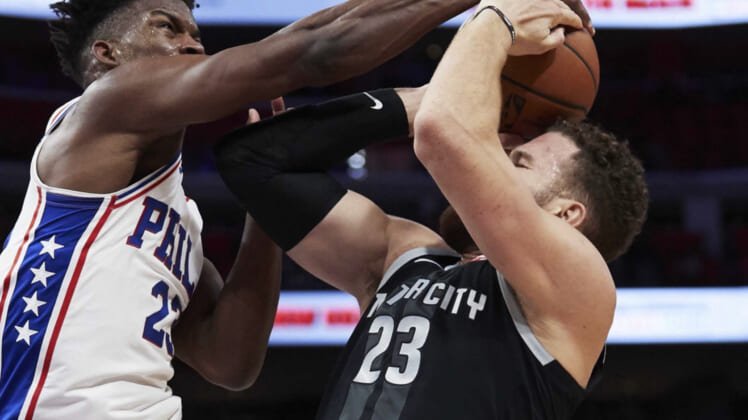 The Philadelphia 76ers and Detroit Pistons did battle for the second time in five days on Monday night. Unfortunately for the Pistons, star forward Blake Griffin didn’t dress for that game. It represented Detroit’s second loss to Philadelphia in less than a week.

In talking about his matchup with Griffin and the Pistons, new Sixers wing Jimmy Butler decided to blast his fellow All-Star. Not only that, he took the NBA’s level of petty to the next level.

“Blake can’t score on me,” Butler said. “I don’t care what you say. You heard that, Blake? Ain’t worried about you.”

We’re pretty sure dropping 31 points on near 50 percent shooting from the field would qualify Griffin as being able to score on Butler and the Sixers.

Let’s not even mention the fact that Butler gives up about 20 pounds to Griffin and the two play vastly different positions.

Sure Butler is an All-NBA defender. This is already known. But Griffin is in the midst of the best season of his career. There are very few that can contain him on offense. That list doesn’t include a wing. Just saying.