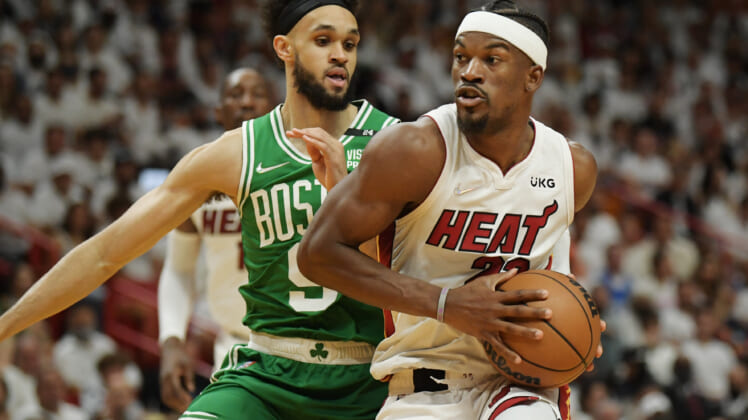 Jimmy Butler and the Miami Heat struggled big time out of the gate in Game 7 of their Eastern Conference Finals series against the Boston Celtics Sunday evening.

Miami found itself down 32-17 after the first quarter. Butler and Bam Adebayo combined to score 12 points in the first 12 minutes with the rest of the Heat roster shooting 1-of-10 from the field.

With this looking like a potential blowout, Jimmy Butler came to play big time in the second quarter. The dude scored 18 points on 5-of-5 shooting in the second stanza. He had it going big time.

This came after Butler scored 47 points in a thrilling Game 6 win over the Celtics in Boston Friday evening. He’s now on pace to drop his fifth 40-point game of the playoffs.

All of this led to Miami finding itself down by a mere six points heading into halftime.

The winner of this game will take on the Golden State Warriors in the NBA Finals starting Thursday evening in San Francisco. If Miami is able to come out on top, it will be primarily due to Butler’s excellence. He’s been absolutely brilliant in the 2022 NBA Playoffs.