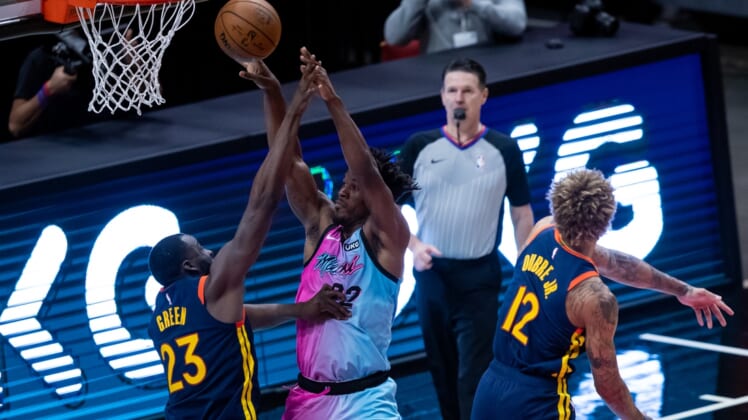 Jimmy Butler scored 22 points and helped the Miami Heat pull away for a 116-109 home victory against the Golden State Warriors on Thursday night.

Butler, who scored 12 of his points in the third quarter, finished with eight assists and six rebounds. His efforts sparked the Heat to their third consecutive win.

The Warriors lost for the fifth time in their past six games despite getting 36 points and 11 rebounds from Stephen Curry. The star guard scored the Warriors’ final nine points and cut Golden State’s fourth-quarter deficit from 13 to seven with back-to-back 3-pointers in the final two minutes.

The Heat stemmed the tide when Victor Oladipo, making his team debut, drove into the paint and hit Tyler Herro with a no-look pass that he turned into a bucket, pushing Miami’s lead back to nine with 52.3 seconds left.

Curry sank three free throws to get Golden State within 115-109, but after Miami’s Bam Adebayo missed a shot, Curry airballed a 3-point attempt with 12.2 seconds left.

Butler subsequently hit one of two free throws to help put the game away.

Curry shot 9-for-19 from the field, including 5-for-11 from 3-point range in his second game since returning from a bruised tailbone.

The Heat took advantage of 20 turnovers by the Warriors, which they turned into 27 points.

Butler’s dunk with 5:48 left in the third quarter put Miami ahead for good.

Oladipo started with Goran Dragic resting as part of his recovery from a lower back injury. Oladipo scored six points and finished with five assists, although he shot 2-for-8 in his 23-minute outing.

Nemanja Bjelica scored his first points in a Heat uniform in his third game since being traded from Sacramento and wound up with eight.