Jimmy Butler has always wanted to be a Laker, per report 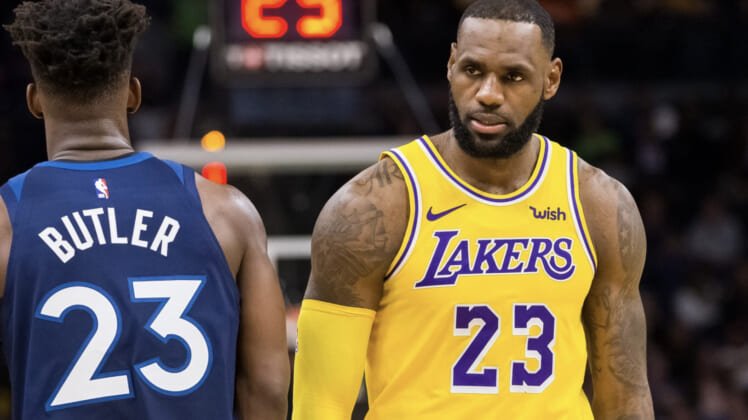 The Los Angeles Lakers made waves on Thursday by adding to the Anthony Davis trade as a way to create a max-contract spot in free agency.

This is no small thing. It opens up the possibility that Los Angeles will be able to team AD and LeBron James up with a third star.

More than any other player, Kawhi Leonard has been bandied about as a possibility. He’s actually set to meet with the Lakers once free agency opens next week.

But according to this report from ESPN’s Nick Friedell, Jimmy Butler is another wow move the team could make. In fact, the report notes that Butler has always wanted to play for the Lakers.

“If we’re looking for the ‘wow’ move, there’s one name on that list (of free agents) that jumps out to me now that they’ve cleared this space. Jimmy Butler,” Friedell reported. “Jimmy has always wanted to play for the Lakers, in Los Angeles. If he, in his mind, can go to a place where he knows, ‘I’m not the man, but I can help try to win a title'”

Is Butler a better option than Leonard? The answer to that question has to be a resounding no. Though, he could be a tremendous fit if the reigning NBA Finals MVP decides to re-sign with the Raptors or move on to the Clippers.

A former All-NBA Defensive Team performer, Butler would slot in nicely at the two-guard position with James playing the three, Kyle Kuzma at power forward and Davis manning the five.

This would leave point guard as the one glaring hole for a Lakers team that would then be capped out.

It’s reasonable to believe Butler could be a target. If so, his dreams of suiting up for the Lakers could play a role.