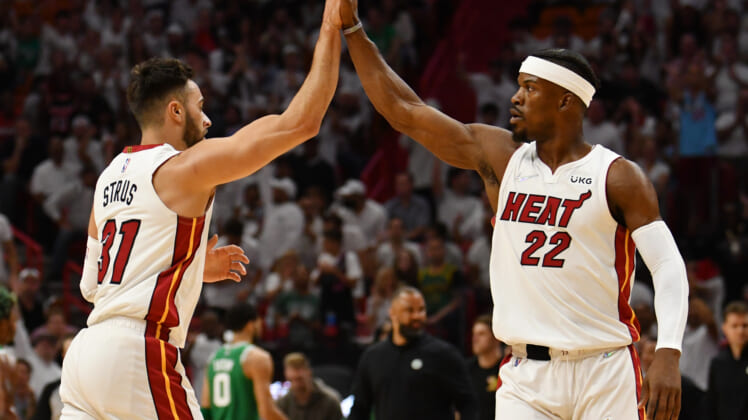 The Miami Heat were off to a hot start Saturday for their Game 3 Eastern Conference Finals matchup with the Boston Celtics in the first half. Then word broke of Jimmy Butler staying in the locker room after halftime as he dealt with right knee inflammation.

Suddenly the vibes in the arena changed.

A victory that initially seemed like a near certainty now became a battle to the end.

We know now that the Heat managed to hold on without their top star, thanks to a strong effort out of Bam Adebayo, but concerns about the health of Jimmy Buckets remained following the game.

Jimmy Butler to give it a go for Game 4

Did anyone really expect the incredibly tough-minded Butler to miss one of the biggest playoff games of his career?

Despite currently having a questionable tag, according to Chris Haynes of Yahoo Sports, Butler “intends to play” on Monday night for Game 4 of the series.

This has to be a huge sigh of relief for the Miami faithful, with Butler leading the team in scoring, averaging 28.1 points per game in the playoffs thus far.

There’s no word on whether Butler will have any sort of limitations that could prevent him from meeting his 36 minutes per game playoff average.

The Heat currently lead the series 2-1, and having Butler on their side surely improves their odds as they prepare to play another game at the TD Garden in Boston.