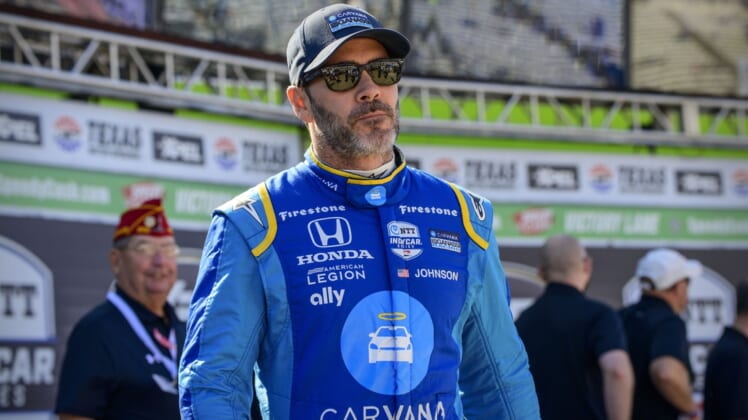 IndyCar driver Jimmie Johnson said he still hopes to race in Sunday’s Grand Prix of Long Beach despite breaking his right hand during a crash in practice.

“I worked with my race team and we’ve created a nice little carbon-fiber splint to support the area that’s injured,” he said. “… I feel very good about things now, I’m willing to try practice, but I really won’t know until I’m out there in the practice session and feel the demands of the race car to know if I can go further and into the race.”

Johnson suffered the injury at the Long Beach, Calif., track on Friday when his Chip Ganassi Racing car drove into the tire barrier on Turn 5.

Johnson crashed again during Saturday’s practice, not long after giving the update on his hand. This time, his car hit the Turn 1 tire barrier.

If Johnson has to pull out, three-time Long Beach winner Sebastien Bourdais would be a likely replacement. He just stepped away from IndyCar this season and was competing in Saturday’s IMSA race at Long Beach.

“I’ll do whatever they want me to do, but they haven’t asked, and I don’t even think we’re there yet,” Bourdais said Saturday. “I just really hope that he’s fine and can race this weekend because he’s obviously showing better pace, and you just don’t want to get setbacks and also hurt yourself. I’m sure he’s tough enough, and he’ll be fine.”

Johnson is competing in his second season of IndyCar open-wheel racing after two decades in NASCAR. He finished in a career-best sixth place at the Grand Prix of Texas on March 20 in Austin.